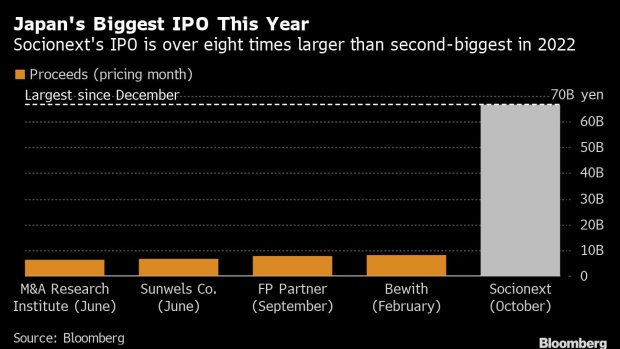 (Bloomberg) -- A Japanese chip design firm executed Japan’s largest initial public offering this year after scaling up the deal and pricing shares at the top of the offered range, a rare feat in a tough year for IPOs globally.

Shares of Socionext Inc. -- which counts Panasonic Holdings Corp., Fujitsu Ltd. and the Development Bank of Japan Inc. among its holders -- were sold at 3,650 yen each in an upsized offering that amounted to 66.8 billion yen ($461 million), according to a statement on Monday. It’s the largest IPO in Tokyo since December.

Holders increased the number of shares on sale by about 55% last month after strong demand from investors, IFR reported. Appetite for the Yokohama-based firm contrasts with several recent listings across Asia that were either delayed, cut in size or that priced at the bottom of the range amid expectations for a mismatch between issuers and investors.

Socionext is a company that designs, develops and delivers systems-on-chips, according to its website. Its solutions are used in consumer, automotive and industrial fields.

While the company’s business is not easy to understand given its “quite unique” segment within the logic semiconductor industry, it has “solid cashflow and a mature business model,” said Hiroaki Tomori, chief fund manager at Mitsubishi UFJ Kokusai Asset. “So I don’t see much downside,” he added.

About 60% of the offering was snapped up by domestic investors, while the remaining 40% ended up with foreigners, according to a statement. The tranche reserved for international investors was oversubscribed by more than 15 times, IFR reported.

Socionext’s expected debut in Tokyo on Oct. 12 could open the door for more divestments by Fujitsu as it seeks to consolidate its holdings in the core IT solutions business, according to Ian Ma, a technology analyst at Bloomberg Intelligence. Fujitsu could sell stakes in Shinko Electric Industries Co., FDK Corp. and Fujitsu General Ltd., he added.

“Moving these assets that have less synergy with the core IT solutions business would be a step in the right direction to overcoming delays in Fujitsu’s targeted 10% profit margin expansion in fiscal 2023 ending March,” Ma wrote in a note last month.