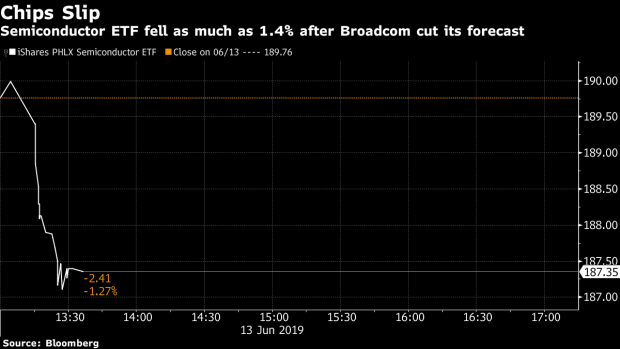 Semiconductor stocks fell in extended trading after Broadcom Inc. (AVGO.O) cut its revenue forecast for 2019, citing a “broad-based slowdown” in demand in the latest troubling sign for the industry.

An iShares exchange-traded fund with the ticker SOXX, which tracks the Philadelphia semiconductor index, fell as much as 1.4 per cent. Broadcom is taking a “conservative stance” for the year as customers reduce inventory levels, Chief Executive Officer Hock Tan said in a statement. Just three months ago the CEO had predicted a return to growth in the second half of the year. Broadcom fell as much as 7.5 per cent post-market.

“We currently see a broad-based slowdown in the demand environment, which we believe is driven by continued geopolitical uncertainties, as well as the effects of export restrictions on one of our largest customers,” Broadcom’s Tan said. “Our customers are actively reducing their inventory levels, and we are taking a conservative stance for the rest of the year.”