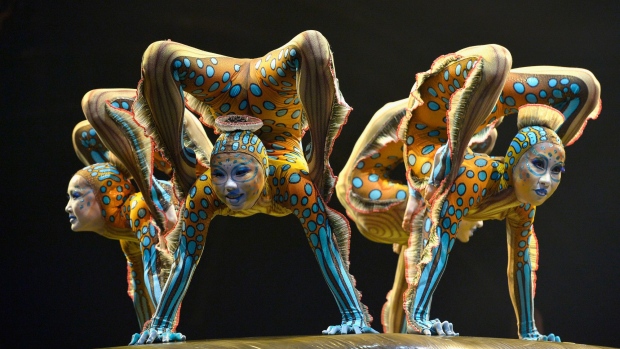 Cirque du Soleil Entertainment Group is in talks with Caisse de Depot et Placement du Quebec for rescue funding after the company’s shows were halted by the coronavirus pandemic, according to people with knowledge of the matter.

The Montreal-based company is discussing options including a capital injection or a loan under a relief fund that Caisse established to aid Quebec companies impacted by COVID-19, according to one of the people, who asked not to be identified because the talks are private. Caisse, Canada’s second-largest pension fund, is a minority shareholder in Cirque du Soleil.

“We follow very closely the companies in which we are invested, and we have ongoing conversations with them,” a Caisse representative said in an email, declining to comment further. A representative for Cirque du Soleil didn’t respond to messages seeking comment while a spokesperson for majority owner TPG declined to comment.

Cirque du Soleil, which grew from a troupe of Quebec street performers into a global live entertainment giant, is working with advisers to explore debt restructuring options, including a potential bankruptcy filing, said the people with knowledge of the situation.

S&P Global Ratings cut the company’s rating to D on Friday, saying that it believes the company failed to make principal and interest payments due March 31 on its first-lien credit facility and an interest payment on its second-lien facility.

The company, which has performances in Las Vegas including Mystere and Michael Jackson ONE, needs to address more than US$900 million of loans after it was forced to cancel shows amid shelter-in-place orders across the globe. Creditors have also retained a legal adviser to help during negotiations, according to the people.

Caisse doubled its stake in Cirque in February, buying out founder Guy Laliberté and supporting the company as it emerges from a string of recent acquisitions including Blue Man Productions and VStar Entertainment Group.

Caisse’s stake climbed to almost 20 per cent from 10 per cent, putting it on par with Shanghai-based Fosun International Ltd, while private equity giant TPG retains its share of roughly 60 per cent. Caisse manages more than $340.1 billion in net assets.