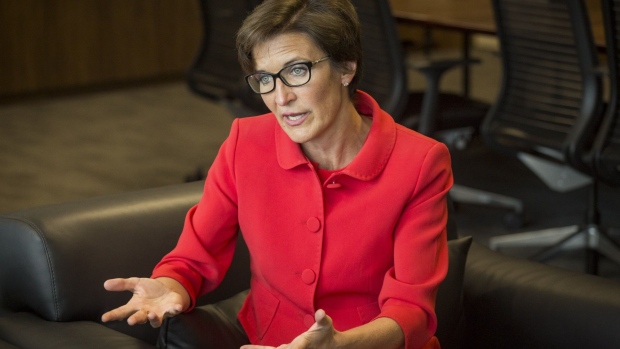 Greg Abbott, governor of Texas, speaks during a Get Out The Vote campaign event in Beaumont, Texas, U.S., on Thursday, Feb. 17, 2022. Abbott has a 10-point lead over Democrat Beto O'Rourke ahead of November's general election, according to a University of Texas and Texas Politics Project poll released Monday. , Bloomberg

(Bloomberg) -- Citigroup Inc. may have found a way of doing business in Texas while addressing one of the state’s hottest cultural divides.

Buried in a filing released Tuesday night, the bank disclosed it will now cover travel costs for employees seeking an abortion after several states including Texas implemented or proposed a near-total ban on the procedure. The New York-based bank will pay expenses, such as airfare and lodging, that employees may incur if forced to leave a state for an abortion.

Under Jane Fraser, who rose to become the bank’s chief executive officer a year ago, Citi is wading into the conflict over abortion rights just as some of the largest banks and asset managers in the U.S. accelerate a flight from the coasts, drawn to Texas and elsewhere by lower taxes, lighter regulation and warmer weather. Reaction from Texas Republicans was swift.

“The ‘travel benefits’ offered by Citigroup is nothing more than a PR stunt by a ‘woke’ company to support a culture of death,” George P. Bush, the Texas land commissioner running for the Republican nomination for attorney general, said by email Wednesday. “Texas is a pro-life state, and if elected Attorney General, I will hold actors who attempt to find loopholes in our laws accountable.”

Matt Rinaldi, chairman of the Republican Party of Texas, said “Citigroup’s decision to finance the murder of unborn children with a heartbeat is appalling, but not surprising, considering its past adoption of far-left causes.” He encouraged Republicans to “avoid entrusting their finances with Citibank and other companies that are hostile to them and their values.”

Texas Governor Greg Abbott signed legislation last year that banned abortion after a fetal heartbeat is detected, which can occur as early as six weeks after conception. Under the law, individuals can sue doctors, clinic workers and others who help a woman end an unwanted pregnancy past the cutoff date.

Abbott declined to comment on Citi’s move and the press office for state Attorney General Ken Paxton didn’t respond to a request for comment.

The biggest names in Wall Street and tech continue to expand in the world’s eighth-largest economy. Fearing political backlash, many have stayed silent amid the stream of laws enacted by Abbott, including banning mask mandates, tightened voting rules, and, most recently, classifying some medical and surgical care for transgender kids as child abuse.

“We do not have a travel benefit for abortion services at this time,” a spokesperson for Wells Fargo & Co. said.

Citi’s policy presents plenty of murky legal issues. Columbia University law professor Carol Sanger said the bank will be opening itself and its human resources employees up to “aiding and abetting” liability under the Texas law. She said the bank may be gambling it won’t get sued “because nobody has been sued yet” under the statute’s enabling provision.

“This is such an outrageous law that they may have decided they’ll make their play, potentially take their lumps,” Sanger said. “The essence of the law hasn’t been decided yet.”

Josh Blackman, a law professor at South Texas School of Law, said Citi’s attorneys may have decided the risk of liability is so low and the cost of travel so insignificant, they’re willing to take that risk. “The bank’s liability is unclear. I’m not certain someone would even have the ability to sue just because Citi paid for an employee’s travel. It’s not clear that would work.”

Some CEOs have tried to openly navigate the culture wars as they strive to retain talent. Match Group Inc. CEO Shar Dubey, whose Dallas-based company owns some of the biggest dating apps, said last year she was creating a fund to help cover the costs for employees and dependents who need to seek care outside the state. Lyft Inc. and Uber Technologies Inc. pledged to pay legal fees for drivers sued under the Texas law.

Salesforce CEO Marc Benioff said in September the company would offer assistance to employees who wanted to leave Texas in response to the anti-abortion law. On March 12, dozens of companies including Apple Inc., Alphabet Inc.’s Google, Dow Inc. and Johnson & Johnson, took out an ad in the Dallas Morning News urging the state to scrap Abbott’s order on transgender kids.

Investor advocates have been pressuring publicly traded companies to counter the push by Texas and other Republican-led states to enact measures focused on abortion, voting rights and LGBTQ issues. Shelley Alpern, director of shareholder advocacy at Rhia Ventures, a private-equity firm that focuses on reproductive health, said Citi’s move ratchets up the pressure on Texas.

“It’s a real breakthrough moment because there have been a handful of other companies that have announced similar policies but none so far have Citi’s stature,” said Alpern. “So it really helps set a new standard and I’m confident that other companies will follow.”

Women’s rights groups were lukewarm on Citi’s move. “While I think this is wonderful, it’s not enough, they can do so much more,” said Aimee Arrambide, an executive director at abortion care advocacy group Avow.

Businesses continue to come to Texas in droves. In the last year, Tesla Inc. broke ground on a pickup-truck factory in Austin and moved its headquarters to the state capital along with Oracle Corp. Samsung Electronics Co. announced it’s building a $17 billion semiconductor plant outside of Austin.

Goldman plans to build a new office campus in Dallas that may become the bank’s largest presence in the U.S. outside its Manhattan headquarters. Charles Schwab Corp. left San Francisco for the affluent Dallas suburb of Westlake, where Fidelity has a campus. Vanguard plans to open a new office in Plano this May.

Citi is working on reviving its underwriting business in the state after a law barred local governments from working with companies that discriminate against firearm entities prompted the firm to suspend its municipal-debt underwriting there for several months. It returned to the market in December.

Keith Wolf, a managing director at recruitment firm Murray Resources in Houston, said Citi could have made a bigger impact if it made a public announcement rather than disclosing the move in a filing. “I imagine it would be a selling point for a group of job seekers.”

Wolf said he hasn’t seen any slowdown in talent moving to Texas.

“These types of issues are very important but it doesn’t mean they will just leave the state because overall its a great place to live,” Wolf said. “While some of these issues are a big concern for people, its not as easy as getting up and leaving.”