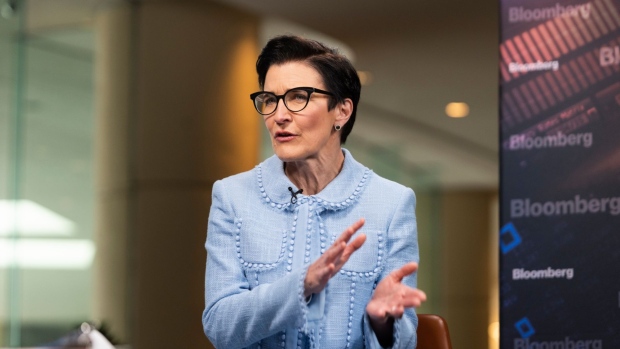 Jane Fraser, chief executive officer of Citigroup Global Markets Inc., speaks during a Bloomberg Television interview at the Milken Institute Global Conference in Beverly Hills, California, U.S., on Monday, May 2, 2022. The event convenes the best minds in the world to tackle its most urgent challenges and to help realize its most exciting opportunities. , Bloomberg

(Bloomberg) -- Citigroup Inc. is seeing countries around the world roll into recessionary environments, with the US economy on track to follow them in the second half of next year, said Chief Executive Officer Jane Fraser.

The New York-based bank is worried in particular about Europe, which Fraser said has already entered a recession. It may take years for countries across the region to recover from the energy crisis they were plunged into following Russia’s invasion of Ukraine earlier this year, she said.

“Obviously, things are softening,” in the US as well, Fraser said Wednesday during the second day of an investor conference in New York hosted by Goldman Sachs Group Inc. Still, “when you go to the states, compared to elsewhere in the world, it is good to be American.”

One by one, US bank executives said this week that, for now, the American consumer remains healthy, though many warned the economy is approaching a slowdown. The comments come after the Federal Reserve has spent months aggressively raising interest rates in an effort to tamp down historically high inflation, similar to moves made by central banks around the world.

JPMorgan Chase & Co., the largest US lender, warned that the country’s unemployment rate will likely rise in 2023 before peaking at 5% the following year. That may spark a “shallow and short-lived recession” at the end of next year, Marianne Lake, co-CEO of JPMorgan’s consumer and community banking businesses, said Tuesday at the conference.

“The consumer is still healthy, still spending money, still sits on cash balances well above pre-Covid levels, but I believe we’re at a bit of an inflection point,” U.S. Bancorp Chief Executive Officer Andy Cecere said at the conference Wednesday. “Things are good today. However, that cash balance and that cushion, so to speak, is going to start to dissipate, and I think that will create a change in behaviors and a slowdown.”

At Bank of America Corp., CEO Brian Moynihan said spending on his firm’s cards rose just 5% in November, a lower rate compared with previous periods. Consumer deposit balances are starting to come down as well, and his bank’s base-case assumption is for a mild recession in 2023, he added.

Goldman CEO David Solomon said Wednesday at the Dallas Citizens Council’s annual meeting that the US is set up for a potential soft landing but could easily see a modest recession. He noted that consumers — for the moment — are still in relatively good shape.

“There is more uncertainty right now on the economic trajectory for the next 12 to 24 months than we have seen in quite some time,” Solomon said. “Hope for the best but prepare for a bumpier environment.”

It’s not just the US looking to rein in inflation: the Bank of Canada raised interest rates aggressively for a sixth straight time Wednesday, while opening the door to pausing its hiking cycle. And while euro-zone inflation slowed for the first time in 1 1/2 years in November, offering a glimmer of hope to the European Central Bank, inflation in the 19-nation euro area remains five times the 2% goal.

Also at the Goldman conference, Fraser said Citigroup’s trading revenue is likely to jump 10% in the fourth quarter from a year earlier as volatile markets continue to spur client activity across Wall Street. The bank’s trading desks should help the firm deliver the “low-single-digit” revenue growth it promised for this year, Fraser said. This quarter, the improved trading revenue is likely to counter a 60% drop in investment-banking revenue, she said.

--With assistance from Sridhar Natarajan, Katherine Doherty and Shelly Hagan.

(Updates with new comments from Goldman’s Solomon in eighth paragraph.)