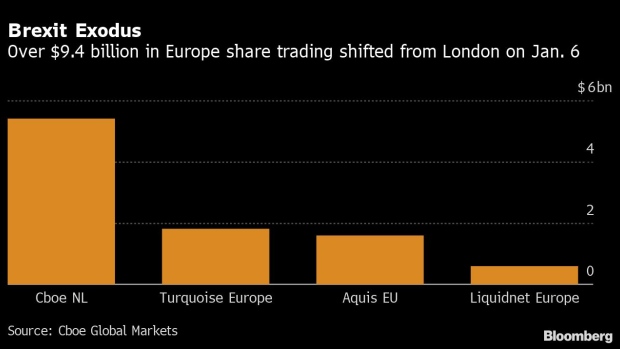 An empty Regent Street and closed stores in London, U.K., on Tuesday, Nov. 17, 2020. With a partial lockdown in England closing all non-essential stores until at least Dec. 2, rescuing the next six weeks from Covid-19 is critical for the U.K.'s financial well-being and a government beset by accusations that it can't get a grip on the pandemic. Photographer: Simon Dawson/Bloomberg , Bloomberg

(Bloomberg) -- One week in, the City of London is coming to a hardening realization about its post-Brexit future: a financial services accord with the European Union may be too little, too late to protect its dominant position.

Negotiations are set to kick off soon to determine regulatory co-operation between the U.K. and EU, after the industry was largely sidelined in the trade deal that marked Britain’s split from the EU on Dec. 31. So far details -- including who will head up the discussions -- are scarce, adding to the gloom among finance executives about the chances of an agreement on market access.

Those talks -- centered around a principle called “equivalence” -- are open-ended without the deadline that governed the trade deal.

European officials have little incentive to hammer out an agreement while financial hubs from Paris to Amsterdam win business at London’s expense. The Bank of England’s Andrew Bailey has also sounded a downbeat note, saying on Wednesday access to the bloc must not hinge on Brussels dictating standards.

The early days of Brexit have laid bare the stakes: London lost 6.3 billion euros ($7.7 billion) in daily stock trades to EU venues on Jan. 4, the first business day after the transition period. The overnight loss added impetus to calls by financial firms and London’s stock exchange to policy makers to ease rules and help the City get a competitive edge over European rivals.

“EU share trading has gone, it will not return,” said David Howson, president of Cboe Europe, the biggest venue for EU shares in London. The firm has seen nearly 95% of this business move, Howson said on Bloomberg Television on Thursday.

While dramatic, the shift is unlikely to have a discernible impact yet on the tax generated by share trading in the U.K., which was more than 3 billion pounds last year. As a whole, the Square Mile accounted for about 75 billion pounds in tax in 2019, including employment taxes, according to the City of London Corporation.

Bankers and asset managers said the week was largely disruption-free. That was due to years of preparation by firms, some of which involved moving business -- although less than initially feared -- out of the U.K.

Firms like JPMorgan Chase & Co. and Goldman Sachs Group Inc. have already shifted scores of jobs and hundreds of billions of dollars in assets, while asset managers including Janus Henderson Group Plc and Standard Life Aberdeen Plc are using funds in Luxembourg and Ireland for clients inside the bloc.

Still, that leaves firms saddled indefinitely with the added complexity and cost of supporting operations in both London and the EU. Others such as Hargreaves Lansdown Plc have decided to stop marketing to European customers.

The return of seamless cross-border business with the bloc hinges on equivalence rulings by policy makers, which allow firms to do business in each other’s territory. A comprehensive agreement would help preserve London as a hub for EU finance, but that may not be the bloc’s priority. It’s long wanted to have more of the financial infrastructure that services the EU and euro-area economies based in member countries.

“I’m very realistic about this,” the BOE’s Bailey told lawmakers last week. “If the price of this is too high then I’m afraid we can’t just go for it whatever.”

The unacceptable cost: London losing its ability to freely set its own rules, which is seen as a vital tool to attract new business. That prospective freedom has already sparked a slew of initiatives.

The U.K. Treasury is reviewing stock-market listing rules, with the LSE among those advocating for easier ways for companies to sell shares in the capital. Jonathan Hill, once the EU’s financial services commissioner, is considering changes to allow Britain to compete better with the U.S., Hong Kong and European cities that are gunning for more share sales.

The Financial Conduct Authority is easing hurdles to encourage investors to trade big orders, and reviewing rules for derivatives trading. Chancellor Rishi Sunak has proposed reforms to grab more of the nascent green finance industry. And while trading in EU shares may have fled London, the U.K. is planning to reverse a ban on trading in Swiss shares. Switzerland is mired in its own standoff with the EU over the process.

“I don’t think this is anything like a death knell for London’s importance in global capital markets,” said Philip Hampton, former chairman of NatWest Group Plc. “Some of these advantages of London -- history, law, language -- are not easily capable of being matched by other centers. London has still got a lot to fight for and a lot to fight with.”

Still, these new opportunities may not replace the business lost to the EU. And with no agreement between the U.K. and EU in sight, there could be more shifts fraying away at London’s financial center in the years ahead.

“Our whole negotiating strategy was pretty dismissive of the City and we’ll come to regret that,” Paul Myners, a former City minister and member of the House of Lords, said in an interview. “I think the change over the next 10 years could be quite profound.”