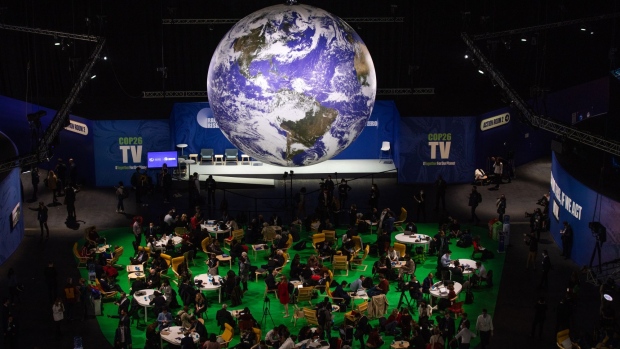 Attendees in the Blue Zone during the COP26 climate talks in Glasgow, U.K., on Tuesday, Nov. 2, 2021. Climate negotiators at the COP26 summit were banking on the world’s most powerful leaders to give them a boost before they embark on two weeks of fraught discussions over who should do what to slow the rise in global temperatures. Photographer: Jonne Roriz/Bloomberg , Bloomberg

(Bloomberg) -- The U.K. has cobbled together a coalition of countries, banks and institutions willing to phase out coal and stop lending for fossil fuel projects abroad. But the deals fall well short of COP26 President Alok Sharma’s aim to “consign coal to history” and China is notably lacking from the plans.

As energy day gets under way in Glasgow, in the background a tense meeting of OPEC+ oil producers is about to kick off. While U.S. President Joe Biden has been calling for more ambitious climate plans in Glasgow, he’s also been urging the cartel to pump more.

But there’s also some good news, potentially. A University of Melbourne study reckons that the measures announced so far at COP26 -- including India’s still to be formalized net-zero pledge -- put the world on track for 1.9 degrees of warming.

The U.K. has corralled about 20 nations including the U.S. to pledge to stop funding foreign fossil fuel projects, though the impact of the deal is undermined by the absence of key countries.

China and Japan hadn’t been expected to sign. Italy, a co-chair of COP26 climate talks, declined to sign, according to two people familiar with the situation. Germany remained in the balance late Wednesday. A German spokesperson declined to comment; an Italian spokesperson wouldn’t comment.

A one-page statement will be unveiled on Thursday at the COP26 climate talks in Glasgow.

There’s still a chance to keep global warming under a 2-degrees Celsius increase -- if all countries honor their commitments to reduce emissions -- according to a new study from University of Melbourne researchers. That includes plans by China and India to reach net-zero by 2060 and 2070, respectively.

The best-estimate warming peak of 1.9-degrees “is still a far stretch” from halting warming around 1.5-degrees, but it’s much better than projections a few weeks ago, the study said.

An all-electric plane capable of carrying 100 people may be available within six years, significantly accelerating the timeline for the introduction of a non-kerosene powered commercial airliner.

See what it’s like to attend the world’s biggest climate conference. Bloomberg reporter Jess Shankleman takes us inside during finance day on Wednesday.