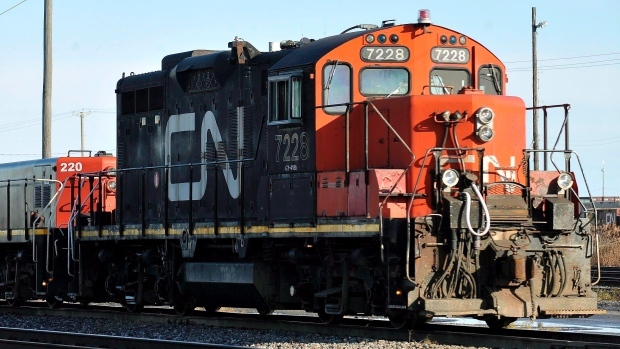 Canadian National Railway Co. (CNR.TO), the longtime paragon of efficiency for North American railroads, is losing some of its luster as it struggles to catch up with a surprise surge in demand.

“They’ve always been the gold standard for railroads, but these last few months have been pretty rough,” said Mario Mainelli, a portfolio manager at Caldwell Investment Management in Toronto, which oversees about $1 billion in assets. “If the issues persist, maybe we have a deeper problem.”

Vowing to fix the service problems, Canadian National is boosting its 2018 capital spending budget to a record $3.2 billion and hiring about 400 conductors in the first quarter alone. In December, the Montreal-based company announced plans to buy 200 locomotives, reversing a trend in which railroads parked equipment because of shrinking demand.

The company’s investment plan this year will address pinch points and add capacity, and is "ready to go as soon as the weather allows us to do so,” spokesman Patrick Waldron said, noting the “very severe, extended” winter experienced by the railroad.

Canada’s biggest rail carrier has dropped 8 per cent since the start of the year, the worst performance among the six biggest publicly traded North American railroads. Twenty-one of the 36 analysts who cover the company have either a hold or sell recommendation on the stock, with 11 who see it as a buy. That’s the worst ratio in the peer group.

“There’s definitely no love in the market for CN currently,” Jayson Moss, an analyst at Franklin Bissett Investment Management in Calgary, which has about $20 billion in stocks and bonds and owns Canadian National shares. “Winter came earlier this year, volumes rose, and that put a lot of pressure on their network. CN historically has been the best-run railroad, but they were caught off-guard with the surge in volumes.”

Halliburton blamed Canadian National last week for halting new shipments of sand needed to produce oil and gas from shale formations through hydraulic fracturing. The delays across a wide section in Minnesota and Wisconsin are expected to last a week. The railroad cited higher-than-expected demand for fracking sand, as well as “brutal” weather and congestion on the tracks.

To be sure, Canadian National’s resilience and efficiency should enable it to bounce back before too long, said Keith Schoonmaker, a Morningstar analyst in Chicago.

“Yes, we will see a few quarters of challenges, but CN still has a very productive network,’’ he said. “Too much demand is a much better problem to have than if your volume goes away -- which is what we see happening with the coal business at the U.S. rails.’’

But in the short term, service yardsticks underscore the hurdles for the Montreal-based railway.

Operating ratio, a widely watched measure of efficiency that compares expenses to revenue, worsened almost 4 percentage points to 60.4 per cent in the fourth quarter. For all of 2017, both Canadian railroads reported 57.4 per cent -- the first time in more than 20 years that Canadian National hasn’t topped its Calgary-based rival.

Through the first six weeks of 2018, average train speed at Canadian National has dropped about 17 per cent year-over-year, according to an analysis by Bloomberg Intelligence based on data compiled by the Association of American Railroads. That’s considerably worse than the 0.6 per cent average increase reported by the railroad’s peers. Dwell time -- the average time railcars spend idle –- increased 43 per cent at Canadian National, compared with 2.3 per cent for the rest of the group.

Canadian National has said it won’t be able to start expanding its network before the end of the winter. That’s pushing some shippers into the arms of Canadian Pacific, said RBC Capital Markets analyst Walter Spracklin, who recently surveyed customers of the railroad.

Carmakers and grain producers are among a group of shippers who either plan to move some of their business to Canadian Pacific or have already done so, he said in a note to clients last week. He didn’t identify customers by name.

“Service issues deteriorated,’’ Spracklin said of Canadian National. “Is there irreparable damage to the shipper relationship? Our view is yes.’’