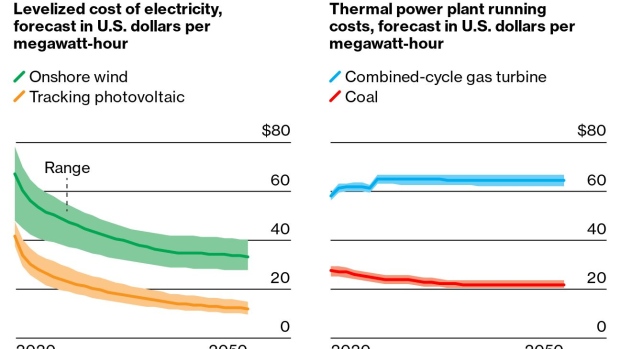 A coal pile at the Goedehoop coal mine, operated by Anglo American Plc, in Mpumalanga, South Africa, on Tuesday, Jan. 12, 2021. In South Africa, for decades almost all the electricity needed to power Africa’s most industrialized economy has been produced by a fleet of aging coal-fired plants constructed alongside the mines to the east of Johannesburg. Photographer: Waldo Swiegers/Bloomberg , Bloomberg

(Bloomberg Markets) -- Power failures have become routine in South Africa. At the same time, the country wants to wean itself off the coal that generates more than 80% of its electricity and makes it the world’s ­12th‑biggest source of greenhouse gases.

Most of South Africa’s power stations are near the end of their lives. An average of about 1,000 megawatts of capacity is set to be decommissioned annually over the next decade, which presents an ideal opportunity to begin overhauling the energy system. The question is how.

The government aims to cut emissions to net-zero by 2050. Its energy blueprint envisions the construction of scores of solar- and wind-powered plants. But there are widespread doubts that those projects can happen fast enough, or be reliable enough, to replace coal. So a controversial fossil fuel remains part of the planned energy mix: natural gas.

“Electricity capacity will have to be replaced,” Mineral Resources Minister Gwede Mantashe said on June 11 during an interview in Mozambique’s capital, Maputo, where he suggested that new pipelines could be built to tap more natural gas from the country’s offshore fields. “Gas is an alternative,” he said. “It can be a game changer.”

PLANS TO USE natural gas to produce at least a quarter of almost 12,000MW of additional power by 2030 are hotly contested. The fuel generates less than half the greenhouse gases that coal does, but replacing the dirtiest fossil fuel with a cleaner one will make South Africa’s emissions target difficult to meet.

Financing for gas-fired plants may also be hard to come by. Several development finance institutions, which are crucial funders of many energy projects in Africa, are revising their investment mandates to exclude the fuel. South Africa may have to rely on companies such as General Electric Co. and Exxon Mobil Corp. that have expressed interest in developing the new gas projects.

“Gas is seen as a bridge to transitioning South Africa away from coal power while allowing the country to maintain its goals of economic generation through industrialization,” says Shridaran Pillay, Africa director at risk advisory service Eurasia Group. “I do not think that renewables in South Africa could be scaled to a level where they would provide the same opportunity to replace base-load generation in a way that gas can at this stage.”

Elisee Sezan, chief executive officer of General Electric’s gas power business in sub-Saharan Africa, sees the current capacity and cost of batteries as the main limiting factors to the expanded use of green energy.

THE LIMITATIONS OF being heavily reliant on renewables have been seen in California, which had two days of rolling blackouts in part of the state last year when the worst heat wave in at least 25 years overwhelmed the grid. The state is investing in battery storage to ensure a reliable power supply.

But some say that problem will be resolved as battery storage technology evolves and costs fall over the next few years. The risk is that South Africa won’t be able to take full advantage if it gets locked into relatively new gas infrastructure and fossil fuels.

“From an economics perspective, it doesn’t really make sense to build significantly more new coal or gas—even running existing coal becomes more expensive than building new solar in the late 2020s,” says Emma Champion, an analyst at BloombergNEF. She says she doesn’t anticipate any significant increase in power demand for the next decade, so it would make more sense to keep existing coal-fired plants running for longer while adding renewable capacity, rather than developing gas projects.

Technology exists to recondition lithium batteries, extending their life span to about 15 years, according to Sabine Dall’Omo, CEO of Siemens AG’s South African unit. “Gas does seem to be a transition technology,” she says. “But I do believe, looking at what coal is going through, that these assets will be more difficult to fund going forward.”

Recent efforts to develop new coal projects in South Africa have been thwarted by court challenges or a lack of financing.

Andy Calitz, secretary general-elect of the Switzerland-based International Gas Union—a trade group that advocates for the use of gas—says South Africa needs the fuel to turn around its struggling economy and address a 33% unemployment rate.

“South Africa’s first energy priority is to secure a reliable power supply, secondly to have more affordable electricity and energy prices, and thirdly to address climate change. This cannot be done without gas,” says Calitz, who previously worked as an electrical engineer at Eskom Holdings SOC Ltd.—the country’s state power utility—and later as CEO of LNG Canada. “Let investors decide about the risk of the assets being stranded.”

PLANS TO DEVELOP gas-fired plants date back to 2015, but they fell by the wayside as then-President Jacob Zuma’s administration pivoted toward nuclear plants.

Gas staged a comeback after the ruling African National Congress forced Zuma to step down and replaced him with his deputy, Cyril Ramaphosa. In March the government selected Turkey’s Karpowership as a preferred bidder to supply about 1,220MW of electricity from gas-fired floating power stations, a contract worth an estimated $16 billion over two decades. But the company’s environmental permit applications have been rejected amid opposition from environmental activists.

Eskom, which supplies about 90% of South Africa’s power, plans to convert existing turbines from diesel to gas. It’s also considering rehabilitating some decommissioned plants to use the fuel. It says financing options remain available.

South Africa already imports gas from Mozambique through a pipeline to chemical and fuel plants operated by Sasol Ltd. Massive new gas deposits have been found off the coast of Mozambique’s northern Cabo Delgado province, though their development has been delayed by an Islamist insurgency.

South Africa is also looking to produce more of its own gas. French giant TotalEnergies SE is considering developing a field off South Africa’s southern coast that contains an estimated 1 billion barrels of gas condensate. The government says that there’s also potential to tap shale gas reserves in the semidesert region of Karoo.

“In an alternative universe, one would immediately eliminate fossil fuel-generated energy such as coal and petroleum,” Mantashe told lawmakers on May 18. “We are committed to a just transition and have begun investing in clean technologies to ensure that we transition from a high- to low-carbon economy, while ensuring security of energy supply.” With Borges Nhamire

Burkhardt is an energy reporter for Bloomberg News in Johannesburg.