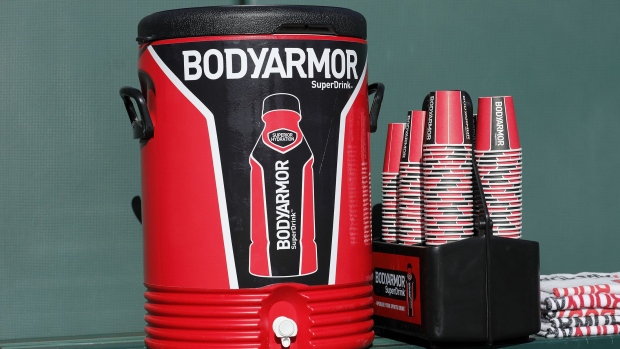 TEMPE, AZ - MARCH 06: A Bodyarmor SuperDrink cooler and cups are seen in the dugout before a spring training game between the Los Angeles Angels of Anaheim and the Chicago Cubs at Tempe Diablo Stadium on March 06, 2017 in Tempe, Arizona. (Photo by Tim Warner/Getty Images)"n"n , Photographer: Tim Warner/Getty Images North America

(Bloomberg) -- Coca-Cola Co. is close to buying a controlling stake in the sports-drink maker BodyArmor in a deal that values the company at about $8 billion, according to people with knowledge of the matter.

A transaction could be finalized in coming weeks, said one of the people, who asked not to be identified discussing private information.

A Coca-Cola spokesman declined to comment. A BodyArmor representative didn’t respond to a request for comment. In 2018, Coca-Cola acquired a minority stake in the company, which counts the late basketball star Kobe Bryant among its earlier investors.

Like rival PepsiCo Inc., Coca-Cola has been benefiting from consumers’ rising thirst for beverages as they return to public venues such as restaurants and stadiums.

A deal would accelerate sales in Coca-Cola’s hydration, sports and coffee segment. Case volume grew 6% in that division last quarter, in line with carbonated products but behind the 12% gain in nutrition, juice and dairy products.

Coca-Cola’s primary sports drink, Powerade, is a distant competitor to PepsiCo’s market-leading Gatorade. Even combined with BodyArmor, the Coca-Cola products would have about 23% of the sports-drink market, well behind Gatorade’s 68%, according to Euromonitor.

Coca-Cola filed a preacquisition notification to the FTC to buy a controlling stake in BodyArmor, the company said in a Feb. 24 filing. With its 2018 investment, Atlanta-based Coca-Cola became the second-largest shareholder in BodyArmor behind co-founder Mike Repole.