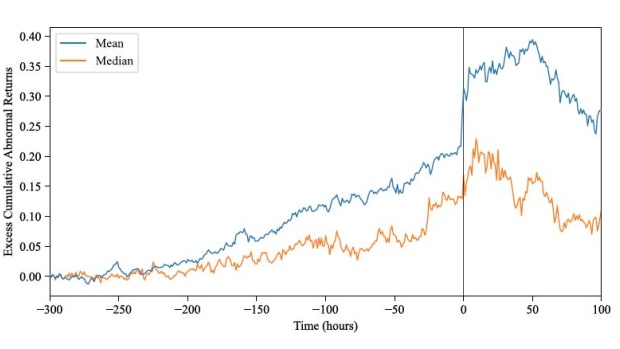 A monitor displays Coinbase signage during the company's initial public offering (IPO) at the Nasdaq MarketSite in New York, U.S., on Wednesday, April 14, 2021. Coinbase Global Inc., the largest U.S. cryptocurrency exchange, is set to debut on Wednesday through a direct listing, an alternative to a traditional initial public offering that has only been deployed a handful of times. , Bloomberg

(Bloomberg) -- The US charge against a former Coinbase Global Inc. employee may not be the only instance of insider trading at the cryptocurrency exchange, according to a new study.

Some traders appear to have snapped up tokens ahead of 10% to 25% -- or 15 to 37 -- of Coinbase listings since 2018, wrote three academics at the University of Technology Sydney. Federal prosecutors had indicted a former Coinbase worker last month for profiting from at least 14 announcements, in a sign of growing regulatory zeal in the asset class.

Coinbase’s status as the largest publicly traded crypto exchange means a listing can open up a token to many more buyers, fueling a sharp price bump that makes it profitable to purchase it before a listing announcement. Some less formal studies in the past have also observed the same pattern at other major platforms such as Binance.

“Coinbase takes allegations of frontrunning incredibly seriously and we work hard to ensure all market participants have access to the same information,” a spokesperson said. “We have zero tolerance for illicit behavior and monitor for it, conducting investigations where appropriate.”

Its efforts include reducing the “relevancy of technical signals during asset testing and integration steps,” the spokesperson said. That should make any clues of upcoming listings harder to detect on the blockchain, the company said in a May blogpost.

The UTS researchers looked at how tokens also available on decentralized exchanges traded during the 300 hours before Coinbase announced they were going to be added to the platform. That’s based on a hypothesis that insider trading was more likely to occur in venues such as Uniswap, which typically don’t require identity checks. Using statistical analysis, the authors then estimated the number of instances where the price rally was likely linked to an insider buying the tokens based on knowledge of upcoming listings, rather than simply bullish speculation.

On average, coins that traded on decentralized exchanges jumped 40% compared to a market benchmark during the 300 hours before the Coinbase announcement. They rose another 2% over the subsequent 100 hours, the study found. There wasn’t much of a pattern for coins not on Uniswap. The researchers -- Ester Félez-Viñas, Luke Johnson and Tālis J. Putniņš -- chose the 300-hour window based on observations of insider trading on the blockchain, Putniņš said.

While the academics arrived at the 25% estimate from statistical analysis, the 10% lower bound comes from blockchain transactions found in four wallets. They are possibly linked to the three men charged by the US, but there is no way to be certain, Johnson said.

Between anonymity and a perceived lack of regulation, “this is an environment where you’re likely to find financial crimes and misconduct,” said Putniņš, a finance professor at the university. “Here we have a unique data set -- the blockchain -- which we don’t have in the stock market that allows us to get more direct evidence.”

The indicted ex-employee and his brother have pleaded not guilty, arguing what they did was not insider trading since it did not involve securities or commodities. The former product manager’s lawyer also contended the information isn’t confidential anyway.