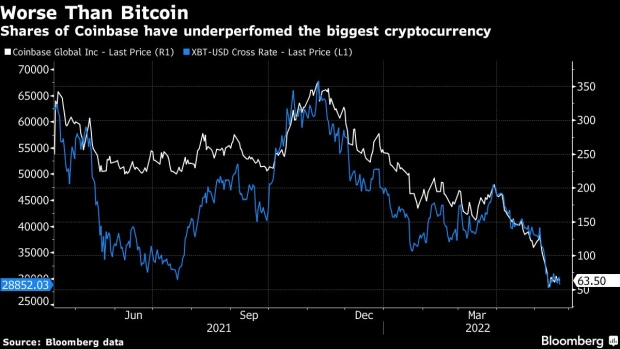 Monitors display Coinbase signage during the company's initial public offering (IPO) at the Nasdaq MarketSite in New York, U.S., on Wednesday, April 14, 2021. Coinbase Global Inc., the largest U.S. cryptocurrency exchange, is set to debut on Wednesday through a direct listing, an alternative to a traditional initial public offering that has only been deployed a handful of times. , Bloomberg

(Bloomberg) -- Coinbase Global Inc. has gone from one of the stock market’s most hotly anticipated debuts to one of its most spectacular crashes in a little more than a year, leaving some analysts and investors bewildered by poor execution at the largest US cryptocurrency exchange.

The firm’s market value has shrunk by about $51 billion since the end of its first day of trading last April. Coinbase shares fell to an all-time low earlier in May, and even after recovering somewhat are still down about 80% from their debut. That’s a steeper drop than Bitcoin’s 53% slump in the same period.

The recent bear market and regulatory pressure in crypto have played a big role. Last year, a promising yield-account product called Lend drew ire from the Securities and Exchange Commission, leading the company to scrap it and prompting a public rant by Chief Executive Officer Brian Armstrong. And as crypto prices crashed in the past six months, trading volumes dropped across most exchanges.

But poor execution played a part as well. Coinbase’s new nonfungible-token marketplace took months to launch -- then fizzled. The company missed analysts’ revenue projections in the first three months of the year and guided for sequentially declining trading volume this quarter -- in part because it has lost ground to rivals. Coinbase’s market share slipped to 4.8% of monthly crypto trading volume currently from 7.1% in November, as some users went to rivals such as DigiFinex and FTX US, according to researcher CryptoCompare.

Coinbase is expected to lose about $1.4 billion this year, according to analysts in a Bloomberg survey. Financial performance at some rivals has held up better, and competition from other exchanges is heating up.

“FTX’s revenues have not declined,” Sam Bankman-Fried, CEO of the exchange, said in an email. “Partially this is because of longstanding market-share growth, partially FTX has been more conservative on expenses, and will remain strongly net profitable this year.”

Some analysts believe Coinbase’s costs are too high. The company recently said it will slow down its hiring, and it could perhaps pause its expansion of sales and support staffs, John Todaro, an analyst at Needham & Co., said in an interview. Coinbase has ballooned to 4,948 full-time employees, from about 1,700 just a year ago. Hiring helped drive the company’s total operating costs to $1.7 billion in the first quarter, up 9% from the previous three months.

“They’ve grown expenses quite a bit,” Todaro said. “And I think the market was giving a little bit of an unfavorable reaction. If we are in a crypto winter, you don’t want to be going into that doubling, tripling the headcount. I think Coinbase management understood that.”

While Coinbase “may be slowing down our hiring, we have no intention of slowing our pace of product development,” a spokesperson said in an email.

In a memo to employees on May 17, Coinbase’s chief product officer, Surojit Chatterjee, said the company will be increasing its focus “on critical revenue-generating products” -- a possible indication it’s backpedaling from its strategy of diversifying away from trading fees. Coinbase will double down on core products while seeking improvements in developer productivity, he said.

“This does not mean we plan to stop investing in strategic and venture projects,” Chatterjee said in a tweet about the memo. “We believe the down market is a great time to build for the longer term.” Coinbase is continuing to support at least one part of its diversification strategy, staking, which lets people earn yields on their digital coins.

The company’s new NFT marketplace -- which was supposed to fuel growth through a new revenue stream -- hasn’t gained traction. After attracting $75,000 in trading volume when it opened to all users on May 4, activity has since dropped, with volume of just $17,000 on May 19, according to tracker Dune. (All major NFT marketplaces have seen a decline in trading volume, however.) Coinbase’s marketplace has about 2,900 active unique users, according to Dune.

“Very little” of Coinbase’s NFT marketplace activity can be captured by tools like Dune, a company executive said during its latest earnings call.

Nick Tomaino, an early Coinbase employee who is now founder of venture fund 1confirmation, said on Twitter this month that he would consider selling his Coinbase shares if the company doesn’t make a strong move in NFTs in the coming year.

In a recent filing, the company said that customers could be treated as “general unsecured creditors” in the event of a bankruptcy, prompting concern from investors that the topic was even raised. CEO Armstrong said on Twitter that his company included the language in response to new regulatory requirements, and that “we have no risk of bankruptcy.”

Coinbase, in trying to come back from its stock slump, has two big strikes against it, said Chris Brendler, an analyst at D.A. Davidson Cos. “It has the dual problem of being not profitable on a consistent basis, and it’s also in crypto, which is also an area the market doesn’t like today,” he said.

Still, the company may be able to bounce back -- as long as the rest of the market does as well.

“If it’s just a mild crypto winter, they could probably weather the storm,” said Mizuho Securities analyst Dan Dolev. “It really depends on how low crypto and Bitcoin goes.”