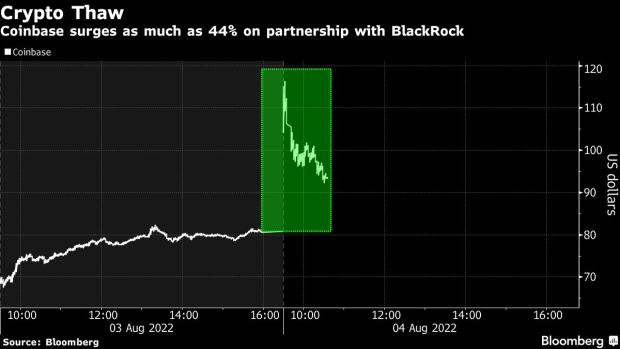 (Bloomberg) -- The crypto winter that has dogged Coinbase Global Inc. for nearly nine months might finally be showing signs of thawing.

Shares of the largest US cryptocurrency exchange surged as much as 44% on Thursday, the most intraday since its 2021 direct listing, after announcing a partnership with BlackRock Inc. to help institutional investors manage and trade Bitcoin. The rally puts the stock on track for a third straight day of gains and sets it up for a record weekly rally.

For Coinbase investors, the news is a much-needed signal that its status as a giant in the crypto sector remains rock solid. To be sure, shares are still deeply in the red this year, down more than 60%.

“After this validation, it is possible that Coinbase will be able to partner with more traditional financial industries,” said Owen Lau, an analyst at Oppenheimer & Co. “It shows that even with the size of BlackRock, they are going to partner with a crypto-native company, rather than building their own capabilities.”

READ: BlackRock Teams Up With Coinbase in Crypto Market Expansion (1)

The sudden surge added $6 billion in value to the company’s market capitalization, bringing it back above $20 billion for the first time since mid-May. While that’s more than double the size of rival Robinhood Markets Inc., it’s a far cry from the peak valuation near $75 billion from Novmeber, when Bitcoin was trading at a record high.

The company has faced a wave of headwinds in recent months as its trading volumes dwindled amid a plunge in the price of Bitcoin and other digital tokens. It’s also facing a probe from the US Securities and Exchange Commission into whether it improperly lets US customers trade assets that should have been registered as securities.

Short sellers, meanwhile, are taking a beating as the stock extends its sharp rebound from July. While shorts are still up more than $800 million this year in mark-to-market profits, those returns are 40% lower than they were prior to Thursday’s jump, according to S3 Partners’ managing director of predictive analytics Ihor Dusaniwsky. “We expect continued short covering in Coinbase as BlackRock’s announced partnership puts a python-like squeeze on short sellers,” he said.

Shares sank more than 21% on July 26 after funds controlled by Cathie Wood sold roughly $1.4 million of stock in the company holdings, worth about $75 million at the time.

Thursday’s move is also notable because it comes on a day when prices of Bitcoin, Ether and other popular digital assets are all lower. The stock has maintained a tight correlation to the world’s largest cryptocurrency since it began trading last year.

Other cryptocurrency-related stocks were also higher following the BlackRock deal, with firms including Marathon Digital, Riot Blockchain and Silvergate Capital all rising at least 5%.

“This is much-needed positive news for crypto traders and should provide some optimism for the longer-term health of the cryptoverse,” said Ed Moya, senior market analyst at Oanda. “Calls that crypto is dead have been overdone.”