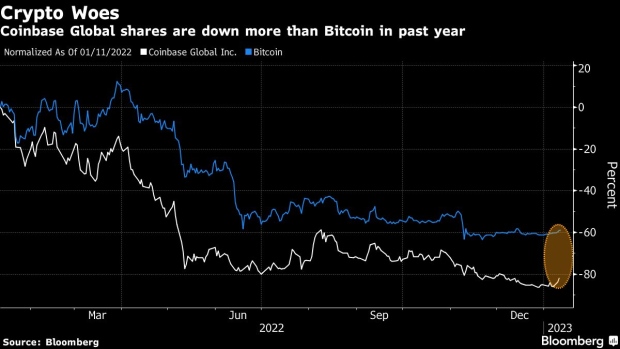 (Bloomberg) -- US-based cryptocurrency exchange Coinbase Global Inc. is closing the bulk of its operations in Japan as part of a move to adjust international investment amid a slump in the digital-asset sector.

The shift comes as the firm cuts 20% of its workforce globally, the latest layoffs at the San Francisco-headquartered firm. Coinbase is scaling back in Japan even as the nation loosens some crypto rules, which has spurred rival Binance — the largest digital-asset exchange — to seek a license to return to the country.

“We’ve decided to wind down the majority of our operations in Japan, which led to eliminating most of the roles in our Japan entity,” Nana Murugesan, vice president for business development and international, said in an interview Wednesday. He said Coinbase won’t comment on potential merger and acquisition activity when asked if the Japan unit could be sold.

The digital-asset industry has been hammered by a $2 trillion rout in token prices from a 2021 peak and a series of blowups, most recently the bankruptcy of the FTX exchange. That’s triggered a series of layoffs at crypto firms.

Coinbase is firing about 950 employees globally, a step Chief Executive Officer Brian Armstrong said was needed to weather the industry downturn. He added that several projects with a lower probability of success will be shut down.

Murugesan didn’t specify how many Japan employees are impacted and said a small number remain to ensure the safety and security of customer assets.

He added that Coinbase is in a transition period until discussions with Japan’s Financial Services Agency are finalized. Japan Chief Executive Officer Nao Kitazawa is involved in those talks and his next steps will be finalized afterward, Murugesan said.

Coinbase previously teamed up with Mitsubishi UFJ Financial Group Inc. to launch a crypto exchange in Japan in 2021. The company has long focused on increasing its presence abroad, with Armstrong saying “international expansion is really core to our mission of increasing economic freedom in the world.”

Murugesan said Coinbase remains committed to global expansion and described the developments in Japan as “an example of right-sizing.” The company is “willing to make hard decisions to make sure our investments are aligned with the local market opportunity,” he said.

Earlier, a spokesperson for the Japan unit said “no decisions have been made at this time beyond the reduction in workforce” while adding that “we are carefully evaluating all options.”

In June, Coinbase announced it would lay off 18% of its workforce, the equivalent of roughly 1,200 employees. It eliminated another 60 positions in November.

--With assistance from Takashi Nakamichi and Nao Sano.

(Updates with comments from Coinbase vice president from first paragraph.)