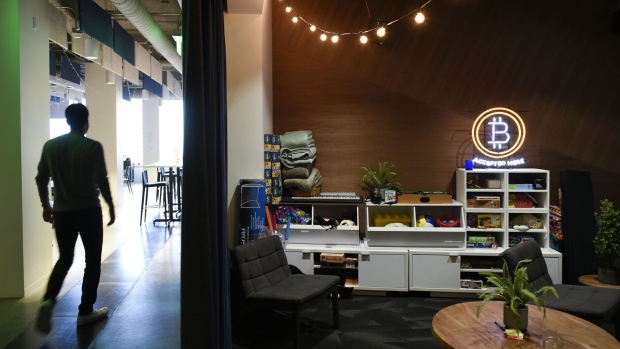 Inside the Coinbase Inc. office in San Francisco, California, U.S., in 2017. , Bloomberg

A week before going public, Coinbase Global Inc. said it expects to report that first-quarter profit of US$730 million to US$800 million, more than double what it earned in all of 2020.

Coinbase, the largest U.S. cryptocurrency exchange, likely generated revenue of $1.8 billion in the first three months of the year, surpassing 2020’s annual total of US$1.3 billion, the company said in a statement with its preliminary results. It had 56 million verified users in the quarter, with an average of just over 6 million users who transact monthly.

The exchange, which also operates a digital-currency custody business, plans to make its debut through a direct listing with Nasdaq on April 14, the first of its kind for a major cryptocurrency company. Other crypto startups considering going public and institutions that have mulled entering the industry will be watching the debut closely to gauge investor demand.

Coinbase didn’t provide any profit or revenue targets for the second quarter or full year. It said it anticipates “meaningful growth” in 2021 revenue from the custody business, but didn’t break out a first-quarter total.

Noting the “inherent unpredictability” of its business, which is impacted by the volatility of token prices, Coinbase outlined three different scenarios for its monthly transacting users for the year, with the most optimistic view predicting 7 million such users and the pessimistic view seeing 4 million for the year.

Coinbase, founded in 2012, was valued at about US$90 billion in its final week of trading on Nasdaq’s private market, Bloomberg News reported. It expects about US$35 million in one-time expenses related to the listing next week.

The company was founded by Chief Executive Officer Brian Armstrong and Fred Ehrsam, a board member who invests in crypto startups. Armstrong, a technical product engineer at Airbnb Inc. before starting Coinbase, owns a stake worth about US$15 billion. Ehrsam, a former Goldman Sachs Group Inc. currencies trader, owns a stake worth more than US$2 billion, according to Bloomberg estimates.

Bitcoin, the largest digital coin by market value, has more than doubled so far this year. That’s helped lift the cryptocurrency market past US$2 trillion and make the timing favorable for new offerings.

The listing will come less than a month after the Commodity Futures Trading Commission said on March 19 it reached a US$6.5 million settlement with Coinbase, resolving claims that the company reported inaccurate data about transactions and that a former employee engaged in improper trades. Coinbase didn’t admit or deny wrongdoing in settling.