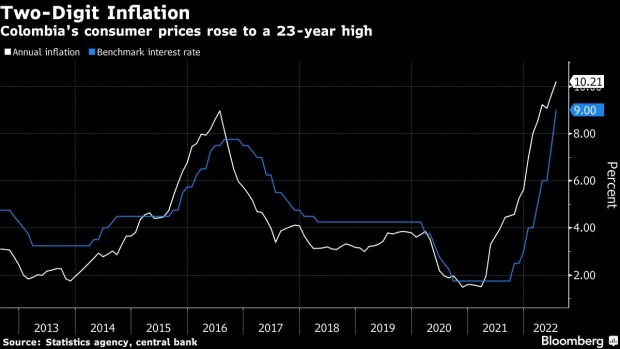 A farmer uses a spray bottle on produce at the Silvia Market in Cauca, Colombia. , Bloomberg

(Bloomberg) -- Colombian inflation accelerated more than expected to the fastest pace since 1999 as the economy outpaces peers and the weaker peso pushes up import costs.

Consumer prices rose 10.21% from a year earlier, compared to a 9.98% median estimate of analysts surveyed by Bloomberg. Colombia targets annual inflation of 3%, plus or minus one percentage point. Prices rose 0.81% from a month earlier.

All of Latin America’s major central banks are withdrawing stimulus to contain soaring consumer prices. Inflation has accelerated across developed and emerging markets over the last year as demand rebounded from the pandemic before supply had fully recovered. That was then aggravated by Russia’s invasion of Ukraine, which hit supplies of energy and grains.

In Colombia, electricity prices rose 22.5% from a year earlier, while milk rose 38.2% and beef rose 27.2%. Inflation was 11.9% for the poorest consumers, and 8.8% for those on high incomes, the statistics agency said.

“The result was higher than expected and is likely to drive up inflation expectations again in August. It supports our expectation for the central bank to continue increasing interest rates this year.”

Colombia’s central bank raised its key interest rate by 1.5% percentage points to 9% in July, the highest since 2009, and signaled that it could raise more, though at a slower pace.

Read more: Colombia Lifts Key Rate to Most Since 2009 After Peso Drop

The Colombian economy will grow 6.9% this year according to the bank’s forecast. The nation’s 2022 expansion will outpace that of Brazil, Mexico, Chile and Peru, according to estimates from the International Monetary Fund.