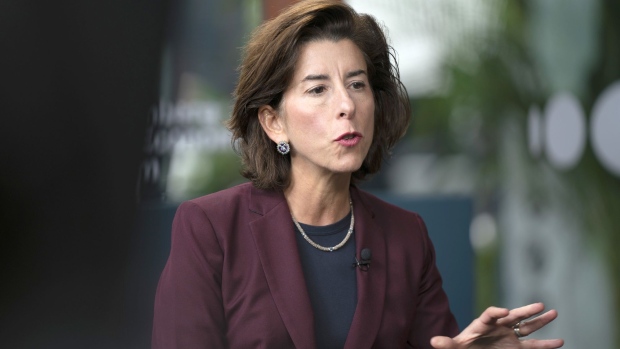 (Bloomberg) -- President Joe Biden’s commerce secretary said she hopes legislation to aid the domestic semiconductor industry will be on the House floor next week, and that she sees broad bipartisan support for its core goals.

Gina Raimondo urged Republicans to vote for the bill despite objections to several provisions and work out the differences with legislation passed by the Senate last June via a conference committee. She said lawmakers from both parties agree that there will be a national-security crisis if the U.S. doesn’t increase chip production.

“There will be disagreements,” Raimondo said in an interview with Joe Mathieu and Guy Johnson on Bloomberg Television on Wednesday. “One thing I can predict to you is that the bill which the president ultimately signs will not look exactly like the bill proposed last night. So let’s get together. The bones are bipartisan. Let’s get to a conference. This is a good starting point.”

Several Republicans opposed an earlier version of the bill, called the Endless Frontier Act, saying it wasn’t hard enough on China. At the same time, progressive groups, led by People’s Action in a letter last week, warned members against any bill that would “lead to more U.S.-China antagonism.”

The House bill includes the same $52 billion in emergency appropriations to help the semiconductor industry that the Senate bill incorporated as part of the Chips for America Act. It also authorizes $45 billion for grants and loans to support supply-chain resilience and manufacturing of critical goods in the U.S.

But it includes climate-related provisions of the House Foreign Affairs’ EAGLE Act, which drew the ire of committee Republicans and resulted in the Senate bill being passed along party lines.