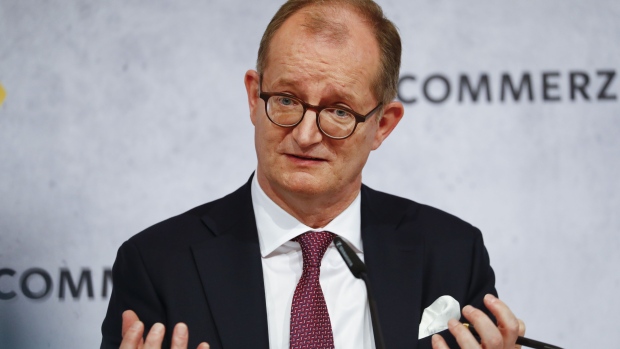 (Bloomberg) -- Commerzbank AG’s leadership was toppled in a shareholder revolt led by Cerberus Capital Management after failing to turn around a lender that’s struggled since its bailout in the financial crisis.

Chief Executive Officer Martin Zielke, in the job for just over four years, has offered to resign, though the bank’s supervisory board still has to accept his resignation and set a date, Commerzbank said late Friday. Chairman Stefan Schmittmann will leave Aug. 3.

“The bank needs a profound transformation and a new CEO, who will get the necessary time from the markets to implement a strategy,” Zielke said in the statement. “Even if we made strategic progress, the financial performance of the bank has been and is unsatisfactory. And as CEO I bear the responsibility for that.”

Cerberus, which unsuccessfully pushed for two board seats, has led an investor revolt at Commerzbank, criticizing the supervisory board and management for being too timid in cutting costs. But the resignation of both the chairman and the CEO suggests that the German government -- the bank’s largest shareholder -- has also lost patience.

Zielke, a former retail banker who took over in May of 2016, is the architect of a pivot away from investment banking and toward lending to private and corporate clients in the bank’s home market. He drove an aggressive expansion of the client base, betting that rising interest rate would make that business profitable again.

When expectations for higher rates didn’t materialize, he struggled to translate customer growth into higher profitability. New targets that he presented last year were widely seen as unambitious, prompting Cerberus to take a more activist approach to its stake in Commerzbank.

The German government also grew increasingly dissatisfied with Commerzbank’s share price performance under Zielke and commissioned consultancy firm Boston Consulting Group last year to make suggestions for how to reshape it. BCG -- in a report earlier this year -- urged Zielke to increase his cost savings target by as much as the factor of three, Bloomberg has reported.

Shares of the lender have lost about half of their value since Zielke took over.

This year, Zielke has been working on another update to his strategy, including possibly more than 7,000 job cuts, branch closures and a scaling back of its international operation, Bloomberg has reported. He was expected to present the new strategy to the board next week.

The announcement on late Friday came before Zielke was expected to present plans for trimming the bank’s international operations as part of a presentation to the board. Management had initially planned to present its plan to the board this week, but the meeting was postponed because labor representatives complained they hadn’t been briefed sufficiently before.