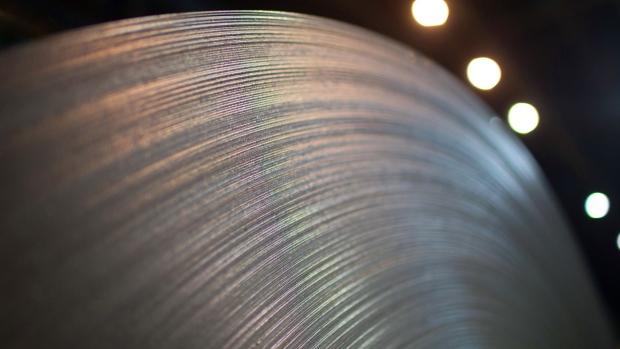 Commodities jumped to their highest in almost a decade as a rebound in the world’s largest economies stokes demand for metals, food and energy, while poor weather harms crops and transportation bottlenecks curb supplies.

The Bloomberg Commodity Spot Index, which tracks prices for 23 raw materials, rose 0.8 per cent Tuesday to its highest since 2011. The gauge has climbed more than 70 per cent since reaching a four-year low in March of last year.

With some major economies emerging from the pandemic, metals are rising as manufacturing picks up, and the return of motorists to the roads is boosting energy prices. Meanwhile, crops like corn, wheat and sugar have surged as dryness hurts plants in Brazil, the U.S. and Europe, while China gobbles up supplies. Hedge funds have been raising their bullish wagers on commodities, signaling a renewed inflationary bet. 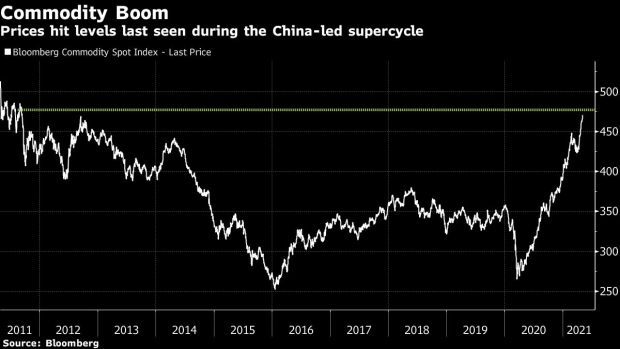 “There’s definitely optimism for an improving economic outlook to lead to acceleration of demand,” Greg Sharenow, a portfolio manager at Pacific Investment Management Co., said in an interview. The futures curves for several commodities are pointing to tight supplies, he added.

The U.S. and China are recovering fast from the pandemic, stoking demand for more cars, electronics and infrastructure. Ford Motor Co. expects a US$2.5 billion impact from commodity costs in the last three quarters of the year, coming from steel, aluminum and precious metals.

Commodities may jump another 13.5 per cent in six months, with oil reaching US$80 a barrel and copper reaching US$11,000 a ton, Goldman Sachs Group Inc. said April 28 in a report. Crude is expected to see the biggest-ever increase in demand over the next six months as the vaccination rollout boosts mobility, according to Goldman.

But while commodities are hot, it’s not necessarily the start of another supercycle -- an extended period during which prices are well above their long-term trend.

The magnitude of demand growth over the next years shouldn’t be the same as when China’s rapid industrialization drove the last supercycle in the first decade of the century, and ample spare capacity should keep a lid on energy prices, Oxford Economic’s Stephen Hare said in a report in April.

The world will begin to rotate into services from goods as workers go back to offices, reducing demand for metals to make home electronics and kitchen appliances, according to analysts at JPMorgan Chase & Co. Iron-ore, which recently touched a record, could pull back about 20 per cent from current levels by year-end, and copper, which last month topped US$10,000 a metric ton, will drop to about US$8,250 in the fourth quarter, according to Capital Economics.

Commodity price swings have a significant impact on the cost of living since they can encompass the price of fuels, power, food and construction projects. They also help shape terms of trade, exchange rates and ultimately the politics of commodity-dependent nations like Russia, Brazil and Chile.

“The surge in commodity prices over the past year now guarantees higher goods price inflation this summer,” IHS Markit Ltd. said in a report on April 29. “During the next few months, even top-line consumer price inflation in countries such as the United States will rise to rates not seen in nearly ten years.”