After a summer breather, the commodities that the world relies on for construction, manufacturing and keeping the lights on are surging again.

Aluminum to steel have seen renewed rallies and European gas and power have hit fresh records, while a gauge of spot commodities prices breached a decade-high set in July. That’s threatening faster inflation, increasing consumer costs and putting pressure on central banks to curb the massive stimulus measures behind much of the raw-materials advance. 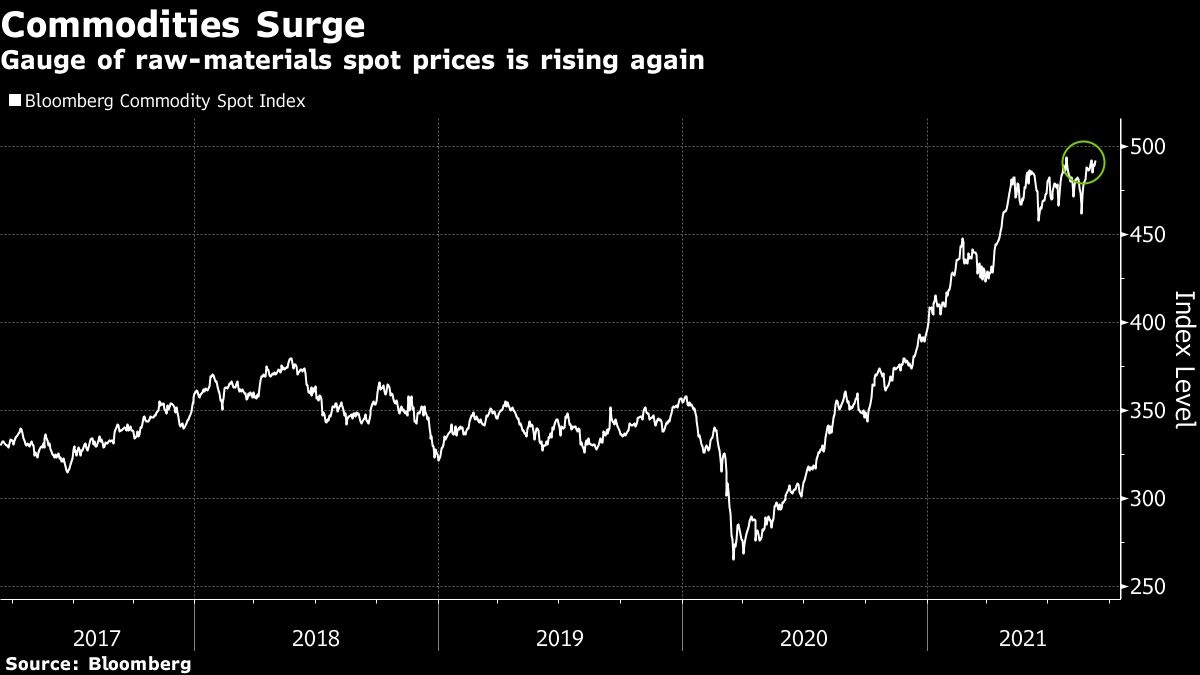 Booming demand from the economic recovery has combined with supply woes -- from China’s emissions crackdown that’s cutting metals output to scant European gas reserves -- to tighten markets. At the same time, the cost of shipping those goods is rising. With a growing scarcity across physical markets, Goldman Sachs Group Inc. sees prices climbing further in the coming year.

“Physical goods demand has reached such high levels -- above pre-pandemic trends in all but oil -- that the system is becoming increasingly constrained in its ability to supply these goods,” Goldman analysts including Jeff Currie said in a note on Monday. “Markets are becoming increasingly exposed to any type of supply disruption or unexpected demand increase.”

Massive global stimulus measures are keeping metals demand strong and helping copper to remain historically high. Yet the economic bellwether has been overshadowed lately as China’s move to curb metals production to reduce pollution and a coup in key bauxite supplier Guinea sent aluminum to a 13-year high of US$3,000 a ton. 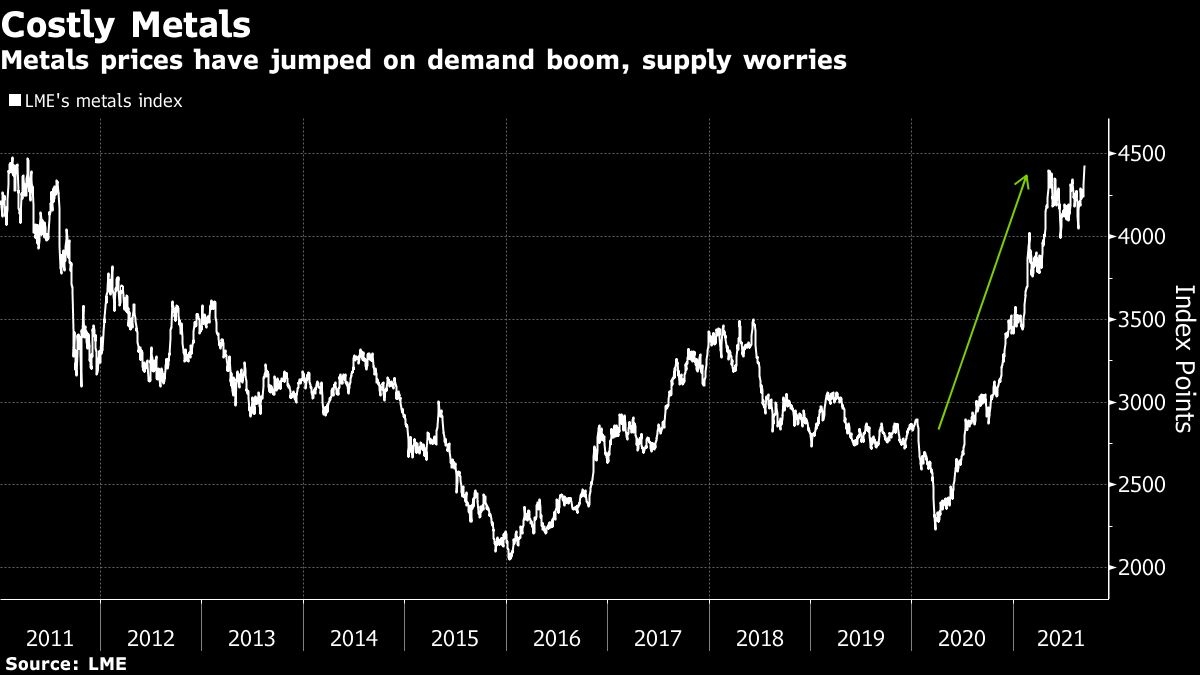 “Although we view the current prices as excessive, and although aluminum is overbought from a technical perspective, there is no sign as yet of any trend reversal,” Commerzbank AG said.

With about a month before the heating season starts, Europe’s gas stockpiles are already at the lowest in more than a decade for this time of year, pushing up the cost of producing electricity. The region is struggling to boost supplies with flows from Norway limited due to maintenance, while supplies remain constrained from Russia.

Benchmark European gas futures more than tripled this year to a record in the Netherlands, and German power prices have notched all-time highs. A rally in the carbon market has also made it more expensive to generate electricity.

Not all commodities are doing so well. Iron ore futures in Singapore are down about 45 per cent from a peak set in May as China’s steel restrictions crimped demand expectations. In agriculture, crop futures eased in recent months amid better harvest prospects, even as a measure of world food prices held near a decade-high.

Oil prices have been relatively stable this month, too. After jumping 10 per cent in the final week of August as Hurricane Ida tore across the Gulf of Mexico, crude has held near US$70 a barrel in New York for most of September. 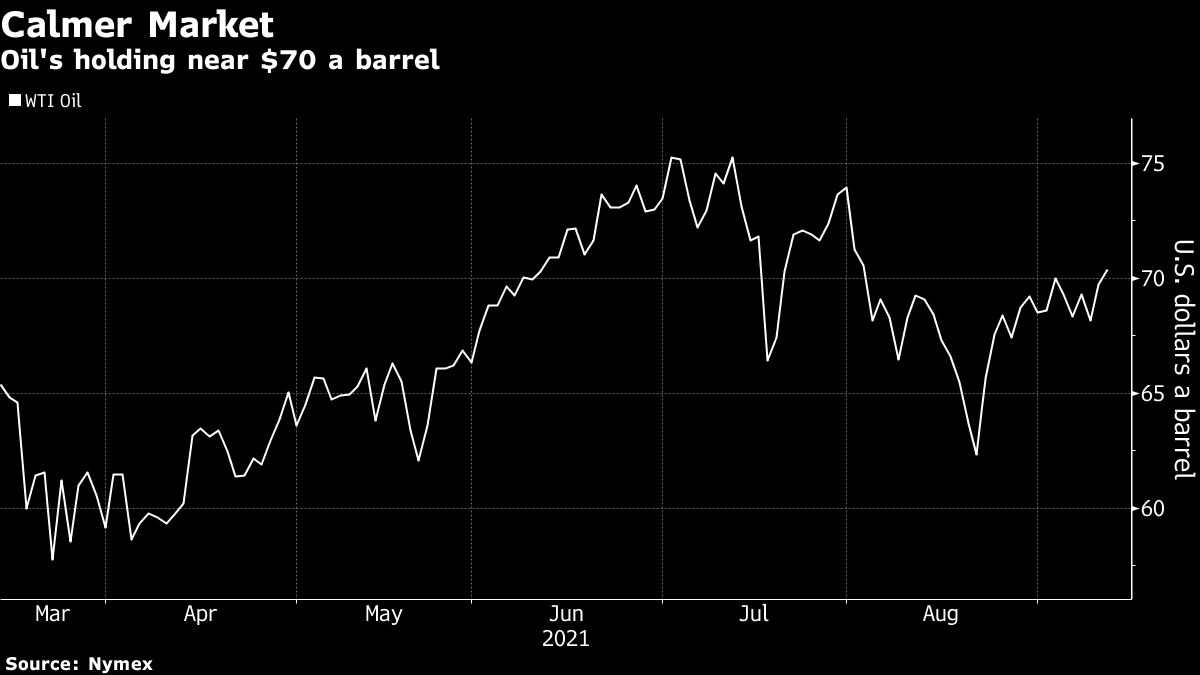 While the storm caused an unusual bullish shock by keeping a large amount of U.S. oil production offline for two weeks, that’s been offset by concerns about the impact on demand from the fast-spreading delta variant of COVID-19, with China seeing another flare-up.

Even so, there are signs that high commodity prices are further feeding through to consumers. Data last week showed China’s factory-gate inflation accelerated to a 13-year high, while prices paid to U.S. producers increased more than forecast.