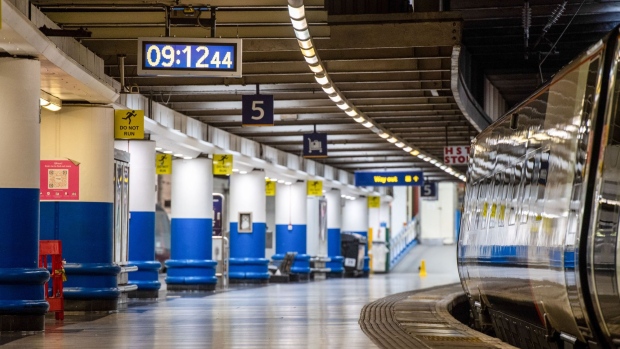 Empty platforms at London Euston railway station, which is closed for the day due to a national rail strike, in London, UK, on Wednesday, Oct. 5, 2022. Two rails unions planned walkouts on Oct. 5, when people will be making their way home from the Conservative Party Annual Conference in Birmingham. , Bloomberg

Commuters across Britain have been hit by another day of disruption after rail workers went on strike at the end of the Conservatives’ tumultuous party conference.

Train drivers from the Aslef union walked out on Wednesday, affecting 13 train companies and services including Avanti West Coast, LNER and the London Overground.

The strikes have worsened road traffic according to data from Waze, a navigation app, as people turn to their cars.

“We’re currently seeing bumper-to-bumper traffic throughout major thoroughfares such as the M25, A40 and M60 with reported speeds of eight miles per hour.”

Hundreds of members of the Transport Salaried Staffs’ Association will also strike this week, with walkouts at CrossCountry on Wednesday and Great Western Railway and Avanti West Coast later in the week.

Read More: When Are the UK’s Next Train Strikes?

“We do not strike lightly but are prepared to dig in as we seek a fair deal on pay, job security and conditions in the face of cuts, economic collapse and a cost of living crisis at the hands of this chaotic Tory government,” said TSSA General Secretary Manuel Cortes in a statement ahead of the action.

Rail strikes are just one of the battlegrounds facing new Prime Minister Liz Truss. Her Chancellor, Kwasi Kwarteng, kicked off the party’s conference in Birmingham this week by reversing his decision to cut the top rate of income tax, amid discontent from Tory Members of Parliament. Another rebellion could be brewing if Truss does not lift benefits by the rate of inflation.

The rail strikes meant many delegates left the conference a day early, according to Politico, ahead of the PM’s speech Wednesday.

The change of Conservative leadership has brought a new Transport Secretary, Anne-Marie Trevelyan, who said in her conference speech Tuesday that “there is a deal to be done between the trade unions and the train operators.” She called on unions to come to the negotiating table.

The TSSA said in a statement that Trevelyan “needs to be proactive and committed, unlike her predecessor who was an obstacle to progress.”