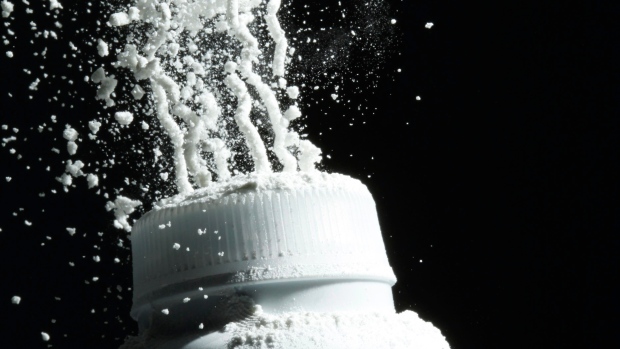 In this April 19, 2010, file photo, Johnson's baby powder is squeezed from its container

NEW YORK - A massive California verdict in a lawsuit alleging Johnson & Johnson's (JNJ.N) talc-based products cause cancer has opened a new front in the litigation, upending the company's hopes that the cases were only gaining traction in Missouri, legal experts said.

The US$417 million award by California jury to a California resident suggested so-called forum-shopping, in which parties seek to file cases in whichever jurisdictions seem most favorable, may not be the main problem facing J&J as it wrestles with some 4,800 outstanding talc lawsuits.

J&J, which denies any link between talc and cancer, said in a statement it would appeal Monday's verdict but declined further comment.

That verdict was more than the sum of all the previous talc awards, which totaled US$307 million and were meted out by juries in the same state court in St. Louis, Missouri, in cases filed by out-of-state residents. A fourth of talc lawsuits nationally were brought in St. Louis after the first large verdicts there.

J&J has cast the St. Louis court as overly plaintiff-friendly and has focused on getting the cases brought by out-of-state plaintiffs dismissed.

"This has very much been about forum shopping," Howard Erichson, a professor at Fordham School of Law, said about the talc trials. "The fact that there has been a big verdict in California is definitely interesting."

Corporations have long fought against plaintiffs filing lawsuits in courts favorable to them, and a U.S. Supreme Court ruling in June delivered them a big victory, holding that state courts cannot hear claims against companies not based in the state when the alleged injury did not occur there.

J&J appeared to be an immediate beneficiary of that ruling, which a St. Louis judge cited in declaring a mistrial in a talc case involving two out-of-state women.

The company also said it believed the Supreme Court decision required the reversal of the four St. Louis verdicts.

But legal experts said the verdict in the California case, in which venue was not an issue, could shift the focus back to the evidence.

J&J shares did not react to the verdict. The company has so far not announced a litigation reserve for talc cases and analysts have said they would not be concerned until that happened.

The first talc award against J&J was handed down in St. Louis state court in February 2016, with the jury ordering J&J to pay US$72 million.

The company prevailed in only one of the four talc trials that followed in the same court, with the other verdicts ranging from US$55 million to US$110 million.

The company has decried the St. Louis court for allowing plaintiffs to present expert testimony linking talc products with cancer that the company contends is speculative and scientifically unsound. It has appeals pending on those grounds.

J&J has contrasted the Missouri court's stance to a New Jersey state court ruling in September 2016 that disqualified plaintiffs' experts, leading to the dismissal of two talc cases. The plaintiffs' appeal of that ruling is pending.

The Los Angeles judge allowed the testimony of some of the same plaintiffs' experts as in St. Louis.

The California jury seemed to react similarly to the evidence, said Diane Lifton, a defense lawyer not involved in the talc case.

"Something clearly inflamed the jury again," she said.

Nathan Schachtman, a product liability defense lawyer, said the California verdict showed that, venue issues aside, the evidence against J&J was compelling.

"I think it's a tough case for the defense," he said.