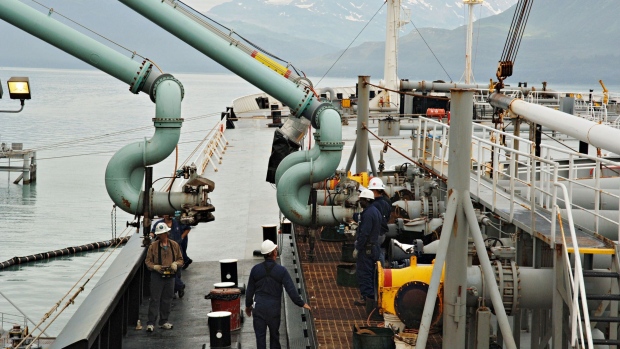 A loading arm is moved into position prior to pumping oil aboard The Polar Alaska oil tanker at berth four of the Alyeska Pipeline Service Company Valdez Marine Terminal in Valdez, Alaska, August 16, 2005. Polar is the marine shipping unit of ConocoPhillips. Bloomberg News/Daniel Acker

ANCHORAGE, ALASKA -- ConocoPhillips hopes to sell parts of its Alaska projects to offset risks and share the expenses of investments planned in the state, company officials said.

The assets for sale include the Kuparuk River unit, the newer Alpine unit to the west and the undeveloped Willow project in the National Petroleum Reserve in Alaska, officials said.

The notable exception is the company's 36-per-cent share of the nation's largest oil field in Prudhoe Bay, officials said.

The proposed sales stem from a plan to invest US$11 billion on core assets in Alaska over the next decade, which does not include the estimated US$5 billion needed to bring the Willow project into production, ConocoPhillips spokeswoman Natalie Lowman said.

"We have a lot of exciting work that we are planning to do on the North Slope, and it costs a lot of money," Lowman said. "So what we're looking for is a co-venturer, a company that shares our vision for increasing production on the North Slope."

ConocoPhillips owns nearly all the assets up for sale, which the company said is unusual. Oil companies often split project ownership into chunks to help share costs, such as the Prudhoe Bay field in which BP and ExxonMobil Corp. also hold stakes, officials said.

The company does not wish to sell more than one-fourth of the assets, thereby retaining control, Lowman said.

The sale price will not be made public, Lowman said.

"This is a large commercial negotiation," Lowman said. "And I think those people who are interested will know how to find us."