We must rebuild confidence in our industry: Triple O’s president on B.C. easing COVID restrictions

Canadians are entering the second half of the year more confident about their economic prospects than they’ve ever been.

Consumer sentiment marched higher to a new record last week, according to polling by Nanos Research Group for Bloomberg News, driven by optimism about the outlook for the economy and growing job security.

The numbers will stoke confidence among economists and policy makers that households will be in a spending mood as pandemic restrictions are lifted, particularly given Canadians are supported by a massive stock of savings accumulated during the crisis. After a rough patch in April and May during a spring surge of COVID-19 cases, the Canadian economy is seen rebounding sharply in coming months to pre-pandemic levels as consumers, and potentially businesses, ramp up spending. 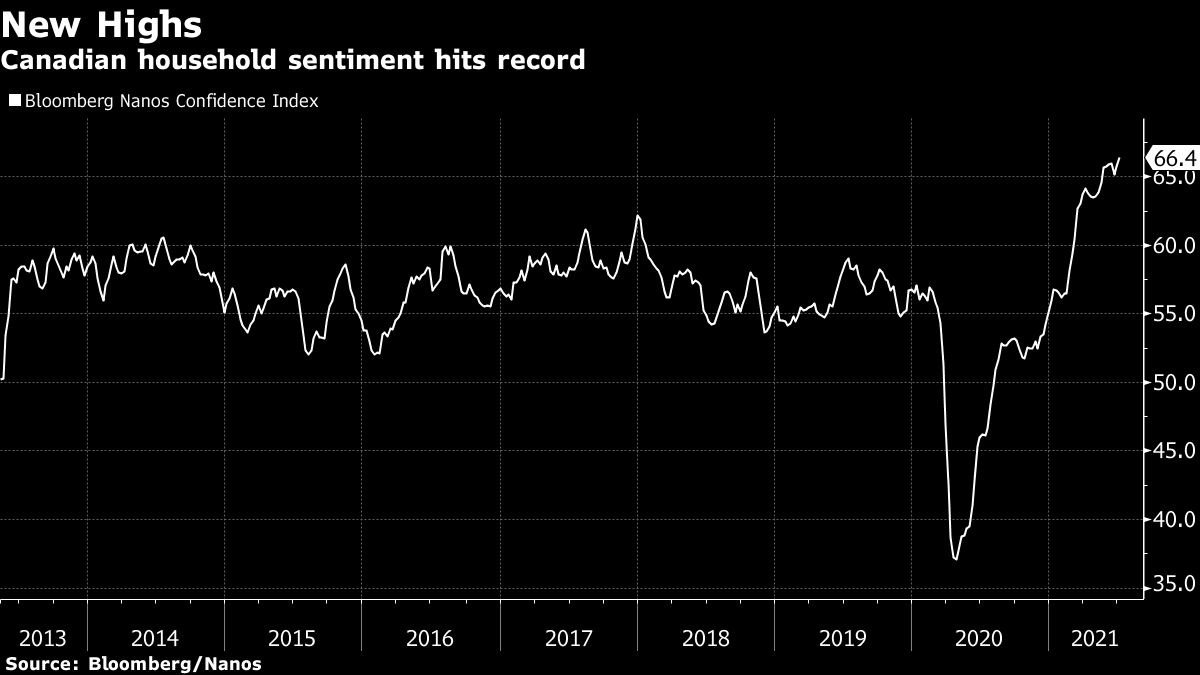 The Bloomberg Nanos Canadian Confidence Index jumped to 66.4 last week, the highest reading since surveys began in 2008. The gauge has historically averaged around 56 and had never broken the 63 barrier until recently.

Separately, the Bank of Canada will release its latest quarterly survey of company managers at 10:30 a.m. Ottawa time, and economists anticipate business sentiment too has risen to near records.

Consumer sentiment in Canada has been on a record run since March as the nation’s vaccine rollout picked up pace -- fueling hope the pandemic is in the rear-view mirror. Currently, 78 per cent of Canadians aged 12 and up have received at least one dose and 39 per cent are fully vaccinated, according to the CBC tracker.

Canadian households have an estimated CUS$220 billion (US$178 billion) accumulated during the pandemic, according to a report on Friday from Bank of Montreal.That’s on top of wealth effects resulting from rising home values that have increased net worth by about CUS$2 trillion.

Some provinces like Alberta have already announced plans to fully reopen the economy. The federal government is also easing border restrictions for fully vaccinated travelers, starting on Monday.

More than half of all Canadians -- 53.5 per cent -- expect the economy to get stronger over next six months, the highest for this question on record. Optimism on the housing market remains elevated, with 59 per cent of respondents saying they expect the value of real estate in their neighborhood to increase. About 70 per cent of Canadians say their job is at least somewhat secure.