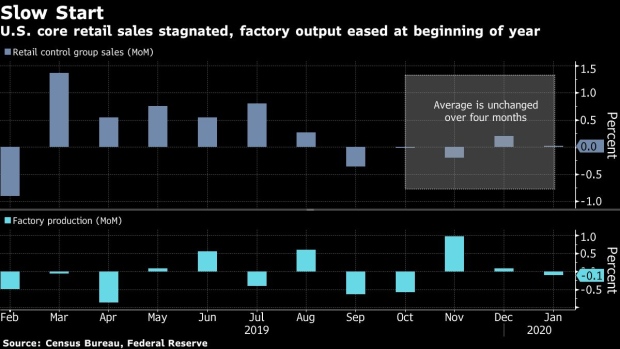 (Bloomberg) -- A key measure of retail sales stagnated in January and factory output eased -- an uninspiring start to the year for the U.S. economy.

Manufacturing output fell 0.1% from the prior month on Boeing Co.’s production halt for the 737 Max plane, Federal Reserve data showed Friday. The so-called control group subset of retail sales, which is seen as a better gauge of household demand, was unchanged after a sharp downward revision to December, according to the Commerce Department.

The figures add to signs that first-quarter growth will cool from the previous period’s 2.1% pace, which is in line with what most analysts see as the economy’s capacity but below the Trump administration’s 3% goal. Amid the Boeing stoppage and coronavirus outbreak, economists have trimmed forecasts for first-half growth while boosting projections slightly for the second half.

Sluggish factory output highlights the effects of lingering headwinds from weak corporate investment, poor export markets and the Boeing troubles. At the same time, a separate report showed consumer confidence at a nearly two-year high, signaling the potential for a pickup in spending that remains the economy’s mainstay.

Against a backdrop of steady hiring and wage gains, American consumers are also enjoying lower gasoline prices and utility bills.

The University of Michigan’s gauge of sentiment rose in February to 100.9, exceeding economists’ forecasts, on brighter views of personal finance and the economy. A measure of consumer expectations increased to the second-highest reading of the record-long U.S. economic expansion.

While core retail sales, which exclude food services, car dealers, building-materials outlets and gas stations, softened in January, the government report showed nine of 13 major categories increased. Purchases at building materials outlets and non-store merchants were the strongest since August, while receipts at general merchandise stores rose the most in six months.

“While the economic outlook remains strong enough for the Fed to keep interest rates on hold, personal consumption moderating from last year’s robust pace makes the economy vulnerable to exogenous shocks, such as the halt in production at Boeing and potential supply chain disruptions stemming from the coronavirus.”

Manufacturing, meanwhile, continues to face challenges. At home, the Boeing production halt and cutbacks in equipment investment are limiting production. Export demand is also weighing on factories, while the virus outbreak will test both supply chains and demand in coming months.

Gross domestic product is now expected to expand at a 1.5% annualized pace in the first quarter and 1.9% in the second, according to a Bloomberg survey this month. The full-year median forecast was unchanged at 1.8%, and economists expect the Fed to keep interest rates steady for the next two years.

To contact the editors responsible for this story: Scott Lanman at slanman@bloomberg.net, Jeff Kearns