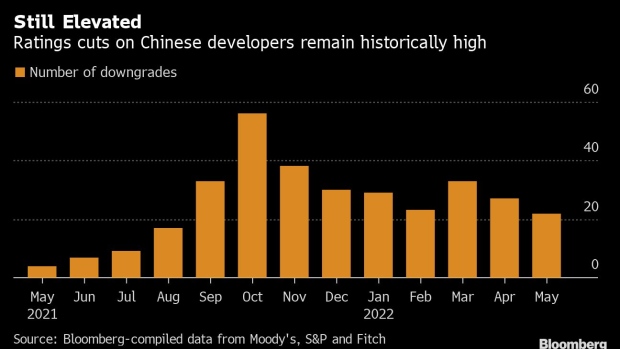 Signage and apartment buildings at the Phoenix City residential project, developed by Country Garden Holdings Co., in Shanghai, China, on Monday, Jan. 17, 2022. The crisis engulfing China’s property sector is impacting its biggest developer, with Country Garden's shares and bonds hammered amid fears that a reportedly failed fundraising effort may be a harbinger of waning confidence. Photographer: Qilai Shen/Bloomberg , Bloomberg

The country’s largest builder by sales was downgraded one notch to Ba1, and Moody’s ratings outlook is negative. The firm on Wednesday cited Country Garden’s “declining property sales and deteriorating financial metrics,” as well as weakened access to long-term funding.

The developer told Bloomberg News that Moody’s move won’t impact its debt-servicing ability and financing capability. It separately announced Thursday that it will repurchase $411 million of notes that mature July 25 through a tender offer launched last week.

Bond defaults since late last year by China Evergrande Group and Sunac China Holdings Ltd., which had been among the country’s biggest developers, highlighted the reach of the sector’s debt crisis. Dropping new-home sales for nearly a year have added to liquidity pressures from a government crackdown on additional leverage growth by property firms. The recent price plunge for conglomerate Fosun International Ltd.’s notes signals financial stress is shifting from builders to other weaker borrowers.

Despite Country Garden’s size -- its $81 billion of revenue last year was nearly triple that of America’s largest homebuilder, DR Horton Inc. -- the Chinese firm’s dollar bonds have had several bouts of sharp price declines even while being seen as a sector bulwark. The company employs more than 200,000 people and has operations throughout China.

“The company has substantial exposure to low-tier cities with weak economic fundamentals” where recovery will be slower, Shu Hui Woon of Lucror Analytics wrote in a research note. Still, “we believe Country Garden maintains a good cash collection rate, has an adequate liquidity buffer and enjoys good access to onshore funding.”

Falling out of investment-grade territory could result in Country Garden facing higher borrowing costs and some investors being forced to sell the firm’s dollar bonds. Prices fell about 1 cent on the dollar Thursday morning, according to data compiled by Bloomberg. Nearly all of the company’s offshore debt is below 70 cents, generally considered stressed levels. However, that’s well above the 30 cents or less that many other developers’ offshore notes have slumped to.

Investors in China’s dollar-bond market haven’t relied on credit ratings for a long time, according to Abhishek Rawat, portfolio manager at Hong Kong Asset Management Ltd. “The market is looking at whether a company is a true [state-owned enterprise] or non-SOE,” he said.

Moody’s moved Country Garden to investment-grade territory in September 2020, but lowered its ratings outlook to negative in March on expectations of falling profit margins and property sales into 2023 as well as weakened offshore-funding access. The firm was put on review for downgrade in May while predicting an approximately 25% contracted-sales decline for this year. Moody’s is now forecasting a roughly 30% drop amid ongoing weakness in China’s property market.

Fitch Ratings raised Country Garden to investment-grade territory in 2017, but put the firm on watch for downgrade back to junk in June.