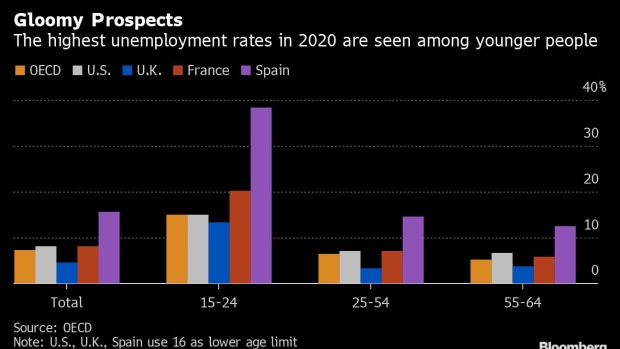 Labor markets in developed nations have recovered only half of the loss of employment they suffered in the pandemic, with the young and low-skilled hurt most.

That’s the conclusion of a 400-page study by the Organization for Economic Cooperation and Development, which found that about 22 million jobs disappeared by the end of 2020 in industrial nations. The Paris-based institution said a full recovery to pre-pandemic levels of employment won’t come until the end of next year.

The findings indicate that the coronavirus crisis accelerated a number of trends that started over the past decade, including growing income inequality, a shift toward more technically demanding jobs and fewer secure employment opportunities for lower-skilled workers.

“Failing to address inequality and exclusion now is likely to result not only in deeper social divisions but will have negative ramifications for productivity and economic recovery,” said Stefano Scarpetta, the OECD’s director for employment, labor and social affairs.

The OECD found a “rapid buildup” of long-term unemployment, with each wave of pandemic restrictions making it increasingly difficult for people to find their way back into the workforce.

“There could be a growing mismatch between the skills and competence of the workers who have lost their jobs, and actually the skills which are in demand in the jobs which are being created,” said Scarpetta at a press conference.

Those in hospitality and service-sector jobs forced to close for months suffered greater levels of joblessness and lower levels of training than those with professional jobs that could be done from home. Employment grew in sectors such as finance and insurance even at the height of the pandemic, while lower-paying occupations had a reduction of more than 28% in hours worked.

It warned about a “particularly worrisome” increase in inactivity among young people in most countries and called for governments to boost training to re-skill workers.

“Ultimately we need to get into the situation where the economy is able to adjust, where we are able to identify those businesses that have a genuinely viable and growing future,” said Secretary-General of the OECD Mathias Cormann.

(Updates with comments from the OECD.)