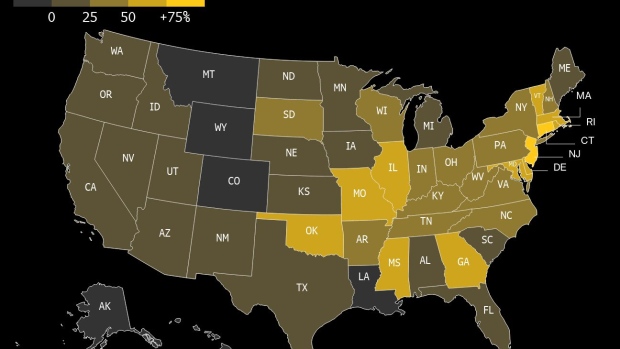 (Bloomberg) -- Two weeks after U.S. residents gathered for the Thanksgiving holiday, Covid-19 hospital admissions are rising quickly in many parts of the eastern U.S., including New Jersey and Connecticut.

In 12 states and the nation’s capital, the seven-day average of admissions with confirmed Covid-19 has climbed at least 50% from two weeks earlier, according to U.S. Department of Health and Human Services data. The areas with the largest percentage upticks in the period were Connecticut, New Jersey, Washington, D.C., Vermont and Rhode Island.

As the world has turned its focus to the omicron variant, cases caused by the delta variant have continued to mount in the U.S., albeit at a less dramatic pace than was seen last winter, so far. The waves have tended to emerge and recede at different times in different regions, and recent hot spots such as Montana and Colorado are now seeing improvement.

Still, the pace of admissions overall has maintained pressure on hospital systems, which have faced staffing shortages persistently since around September.

At a news conference this week, Colorado Governor Jared Polis said hospital capacity and staffing weren’t as dire as last month but the state is adding beds just in case. Delta variant cases account for hospitalizations and most of those patients are unvaccinated, said Rachel Herlihy, state epidemiologist.

The steady uptick and the threat of omicron have prompted companies to rethink return-to-office policies. Lyft Inc. said Wednesday that employees can work remotely for the rest of the year, reversing a previous position, while Jefferies Financial Group Inc. has asked staffers to work from home.

In New Jersey, average daily hospital admissions reached a seven-day average of 206, up 78% from two weeks earlier, the data show. Even so, at this time a year ago, the pace of admissions was well over twice as fast.

“The overwhelming majority of our new cases, new hospitalizations and new deaths, sadly, are from among the unvaccinated,” Governor Phil Murphy said during a Dec. 8 briefing.

In New York, Governor Kathy Hochul ordered more than 30 hospitals that were filling up with patients to halt some procedures. New York City Mayor Bill de Blasio this week announced a vaccine mandate for private-sector workers amid the post-Thanksgiving rise in Covid infections and the detection of the first several cases of omicron. In an interview on Hot 97 on Thursday, de Blasio pointed to hospitals in upstate New York that are starting to get overwhelmed.

“The urgency I’m feeling is we can move now before we end up in that situation,” he said. “Biggest city in America, densely populated, we cannot let that happen here.”