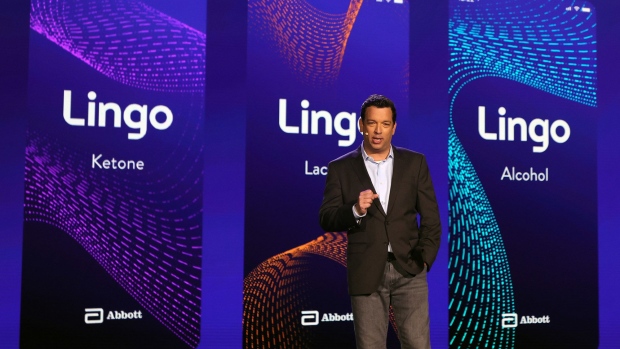 Abbott Chairman of the Board and CEO Robert B. Ford introduces the company's Lingo biowearables portfolio of products as he delivers a keynote address at CES 2022 at The Venetian Las Vegas on January 6, 2022 in Las Vegas, Nevada. , Photographer: Ethan Miller/Getty Images

(Bloomberg) -- Abbott Laboratories is eyeing a launch of wearable products later this year for the general public outside the U.S., Chief Executive Officer Robert Ford said.

Ford described the new product line, called Lingo, as a major opportunity for the company that over time could be larger than the market for diabetes products. Its FreeStyle Libre diabetes monitors brought in about $1 billion of the company’s $11.5 billion in fourth-quarter revenue.

“We’re really in the early inning stages here, but I think that the numbers can be pretty significant and pretty large,” Ford said, speaking on a conference call with investors on Wednesday.

Ford announced plans for Abbott to use the FreeStyle Libre technology for consumer wearables during a presentation at the Consumer Electronics Show earlier this month. The sensors will measure things like glucose, ketones and lactate for use with tracking diet and exercise, the company said at the time. Monitoring alcohol levels is another possibility.

The company is also looking at other measures the technology could track with more medical applications, such as for use in hospitals.

Abbott will discuss the regulatory path with the U.S. Food and Drug Administration. It’s “probably a little bit too early right now to talk about that,” Ford said.

Abbott already sells a version of Libre in Europe for use by athletes.