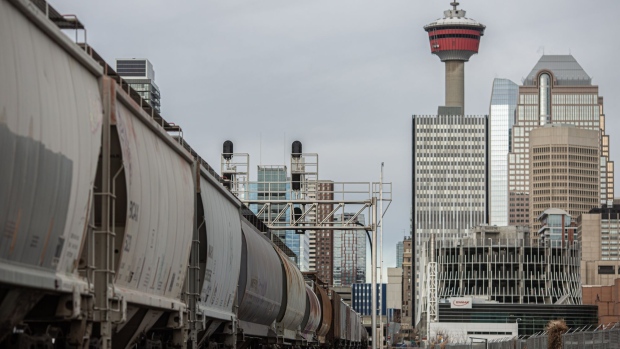 A train moves through a rail yard in Calgary, Alberta, Canada, on Monday, March 22, 2021. Canadian Pacific Railway Ltd. agreed to buy Kansas City Southern for $25 billion, seeking to create a 20,000-mile rail network linking the U.S., Mexico and Canada in the first year of those nations; new trade alliance. , Bloomberg

Canadian Pacific Chief Executive Officer Keith Creel called Canadian National’s $30 billion bid “illusory” while pointing to opposition from the U.S. Justice Department and a large shareholder, as well as a decision by the U.S. Surface Transportation Board to judge the Canadian National deal under tougher rules.

“We respectfully believe there is no longer any basis to terminate the CP-KCS merger agreement,” Creel said in a letter to Kansas City Southern’s board. “The best way for the KCS board to fulfill its fiduciary duties in light of recent developments would be to continue to pursue the CP-KCS combination.”

Canadian Pacific shares were up 2.2% at 9:36 a.m. in Toronto, while Canadian National shares were down 1.4%. Kansas City Southern shares slipped 0.2% in New York.

The battle will decide which Canadian carrier gets to be the first railroad to operate from that country through the U.S. to Mexico, which is poised to capture investment as companies seek to use a renegotiated trilateral trade agreement to shorten supply lines across the Pacific. Kansas City Southern, which gets about half of its revenue from Mexico, is the smallest of the seven large U.S. and Canadian railroads and one of the industry’s few substantial merger targets remaining.

In the letter on Thursday, Creel reiterated that Canadian Pacific wouldn’t engage in a bidding contest and “remained confident” the STB, which has the final say on U.S. rail mergers, wouldn’t approve Canadian National’s proposal for a voting trust to close the financial portion of the deal. Kansas City Southern has said a voting trust is a requirement for the deal. Creel also noted that TCI Fund Management, a major shareholder in both Canadian railroads, urged Canadian National to drop its bid.

“We feel it would be destructive to our mutual interests to engage in a bidding war in reaction to CN’s illusory offer, particularly where our existing CP-KCS merger agreement provides KCS’s shareholders with a significant premium,” Creel wrote.

The STB has approved Canadian Pacific’s use of a voting trust for its proposal, which would allow Kansas City Southern’s investors to get paid for their shares before the year or more it will take for regulators to approve merging operations. The STB said Canadian National’s plan to use a voting trust, a Kansas City Southern requirement, was incomplete in the absence of a merger agreement.

Also, the board said it would ultimately judge Canadian National’s proposal under stricter merger rules than Canadian Pacific’s, explaining that the smaller railroad’s plan would “result in the fewest overlapping routes.” Canadian National has to prove that its deal would be in the public interest, while Canadian Pacific merely has to establish that its tie-up wouldn’t hurt competition.

After a gusher of railroad mergers followed deregulation in the 1980s, the regulator in 2001 attempted to stanch further consolidation by issuing the more-stringent rules.

Canadian Pacific has argued that its proposal would be more acceptable to shippers because it would be an end-to-end merger with no overlapping tracks and the railroads meeting only in Kansas City, Missouri. Canadian National has maintained that its roughly 70 miles of overlapping tracks are minimal and that a solution over reducing competition can be found.