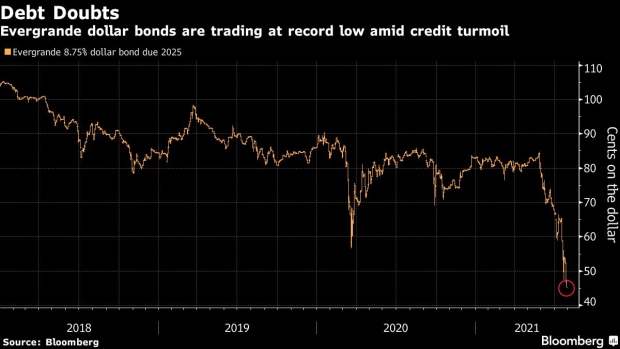 A pedestrian uses a smartphone in the Lujiazui business district in Shanghai. Photographer: Qilai Shen/Bloomberg , Bloomberg

(Bloomberg) -- Increasing credit stress in China stemming from a government crackdown on a range of industries could spread to U.S. investors’ credit portfolios.

Global high-yield fund managers suffering losses in their Asia credit portfolios could look to lower risk across their holdings, or to sell more liquid, high-performing bonds such as U.S. speculative-grade notes to meet redemptions, according to UBS Group AG head of credit strategy Matthew Mish. That selling pressure could weigh on valuations for the securities that are at record highs.

“Managers may choose to reduce risk preemptively or if there’s less liquidity in Asia credit,” Mish said in a phone interview Tuesday. “They may also sell in part because regional valuation differences are extreme.”

Credit distress in China is the most significant risk to global credit markets now, according to Bank of America Corp. That’s because China is the second-largest U.S. dollar corporate bond market in the world with $425 billion in bonds outstanding and the second-largest domicile of dollar high-yield debt at $103 billion, strategists Oleg Melentyev and Eric Yu wrote in a note earlier this month.

“And so when 15% of it is trading at distressed levels, we pay attention,” wrote Melentyev and Yu, referring to the percentage of Chinese U.S. dollar high-grade and high-yield bonds that were trading at spreads above 10 percentage points as of the July 9 research note.

The risk is high enough that T. Rowe Price’s emerging markets debt team has been cutting the size of its exposure to Chinese high-yield debt since the first quarter, and has been switching into higher-quality junk-rated securities there as well.

Generally, the government has been telegraphing that it intends to allow more companies to fail, which is ultimately good for the financial system there even if it translates to near-term price declines, said Ben Robins, global fixed income portfolios specialist.

Much of the outcome in China hinges on what the government does next. China’s securities regulator convened a virtual meeting with executives of major investment banks on Wednesday, attempting to ease market fears about Beijing’s crackdown on the private education industry.

Recent growing fears in financial markets have stemmed from China’s escalating crackdown on industries from technology to education and property. Yields on Chinese junk dollar bonds reached a 15-month high, while risk premiums on their investment-grade counterparts saw their biggest daily jump since April, Bloomberg Barclays indexes showed as of Tuesday.

“If there is a restructuring or default event in that market with a large issuer and you start to see spillover, that is a cascade of defaults more broadly and a sense this is becoming more of a systemic event, that would change the picture,” said UBS’s Mish. “It’s certainly one possible outcome, but it’s not our base case and a lot of this is heavily dependent on the government.”

One of the biggest concerns in China’s credit markets now is property company China Evergrande Group. The world’s most indebted developer --and Asia’s biggest issuer of high-yield dollar bonds -- has struggled to reassure the market that it has ample ammunition to make good on its borrowings while also countering short-sellers.

Now Evergrande’s main onshore unit is being sued by a mining company for unpaid bills. S&P Global Ratings cut the company’s credit rating deeper into junk late Monday, making it the third downgrade by a global firm in about a month. While Evergrande has repaid all its public bonds due this year, refinancing notes due next year would be challenging if the developer’s access to the capital market doesn’t recover in time, S&P said.

The developer’s dollar bonds due 2025 extended declines for a third day on Wednesday, falling about 2 cents on the dollar to around 45 cents, set for another fresh low, Bloomberg-compiled prices show.

One source of vulnerability for U.S. junk bonds is that their valuations are relatively high. The Bloomberg Barclays U.S. Corporate High Yield total return index reached a record high on July 12, and has been hovering close to that level recently. As of Tuesday, the index was just 0.2 percent below its peak.

Triton International Ltd was the sole issuer selling bonds in the U.S. investment-grade market on Wednesday, pricing $600 million of notes, upsized from $500 million.

Earnings season is well underway, with Deutsche Bank AG raising its revenue guidance for next year even as it scrapped a cost target after a series of unexpected expenses