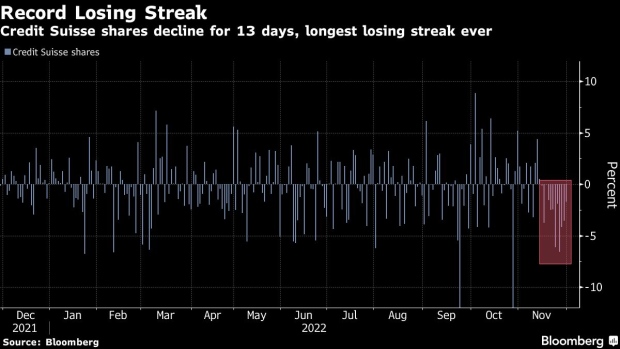 An illuminated sign in the window of a Credit Suisse Group AG bank branch at night in Bern, Switzerland, on Sunday, Nov. 27, 2022. Credit Suisse clients pulled as much as 84 billion Swiss francs ($88.3 billion) of their money from the bank during the first few weeks of the quarter, underlining ongoing concerns over the bank’s restructuring efforts after years of scandals. Photographer: Stefan Wermuth/Bloomberg , Bloomberg

The stock fell as much as 5.49% to a record low of 2.67 Swiss francs, just 6% above the price of 2.52 francs for subscription rights that Credit Suisse offered existing investors. The bank had set the price at a discount of 32% to its stock value after the strategy presentation in October.

Credit Suisse is contending with its longest run of share losses ever, as the dilution from the capital raise adds to the pressure from years of scandal and mismanagement. The bank has warned it will post a loss of as much as $1.5 billion Swiss francs in the fourth quarter, and has seen massive outflows from the key wealth management business amid a slump in confidence.

The threshold of 2.52 francs is “the ‘hard underwriting’ price for the consortium of 19 banks,” JPMorgan & Co. analysts said in a research note. If Credit Suisse’s shares keep trading above that level until “the last day of rights trading on Dec. 6, 2022, we can assume at that point the capital raise was most likely a success.”

Having a large number of underwriters makes it easier to find buyers and reduces the risk for the investment banks to get stuck holding a large amount of the shares. As part of the lender’s capital raise plans, Saudi National Bank to invest up to 1.5 billion francs in the lender, becoming a top shareholder.

Credit Suisse Chairman Axel Lehmann, speaking at a conference in London on Thursday, said that the stock would stabilize after the rights issue is completed and that investors should expect volatility until then. The new shares are due to start trading on Dec. 9.

“I cannot predict where the share price is going,” Lehmann said. Until the end of the capital raise process, “we will have a little bit of volatility, but then I think it will start to somewhat stabilize and bottom out, and then we go from there.”

The rights issue, which is fully underwritten, “was one of the most intensely debated topics, one of the most difficult decisions we needed to take.,”  he said. “But that your share price goes to roughly three francs or lower, it’s not a real surprise in terms of the dilution you need to do.”

While the rights offer is “highly unlikely” to fail, such a scenario would cause S&P to “evaluate” the impact on the credit ratings it has placed on Credit Suisse, analyst Anna Lozmann said by email. She also said that “continued strong outflows of deposits” could be a “trigger for a negative rating action.”

Credit Suisse’s overhaul, including job cuts and the carve-out of the investment banking business, has met with skepticism from analysts and investors concerned about the complexity of the restructuring. In the ongoing 13-day rout, Credit Suisse has lost about 2.7 billion francs in market value and is down about 66% this year, amid continued concerns about the stability of the business.

“Credit Suisse shares are a tough buy at this point,” Frederik Hildner, founder and CEO of Confluente Capital, a boutique asset manager that holds no Credit Suisse stock, said in an email. “Valuation is low but from an investor’s perspective the lender really looks in a very bad shape and there is no visibility of any immediate improvement in share price performance,” he said.

The “material capital raise” and lack of details on a “very complex” investment banking restructuring is weighing on Credit Suisse’s shares, JPMorgan analyst Kian Abouhossein wrote in a note on Thursday. He also cut earnings estimates by 45% for 2023, citing the hefty outflows in the bank’s wealth management business.

Talks about a possible takeover of Credit Suisse are likely to pick-up if outflows continue, he said. That might also lead the bank to consider an initial public offering of its Swiss business, with a valuation of 14 billion francs, Abouhossein added.

Clients pulled as much as 84 billion Swiss francs ($88.3 billion) of their money from the bank during the first few weeks of the quarter, Credit Suisse said Nov. 23. The outflows were particularly pronounced at the key wealth management unit, where they amounted to 10% of assets under management. Still, the bank at the time said that outflows had “reduced substantially” since then.

The cost to insure Credit Suisse’s debt against default eased about 13 basis points on Thursday, to 433 basis points, according to ICE Data Services. Still, it remains elevated, hovering near all-time highs.

The bank’s long-term credit rating was cut last month to BBB- from BBB, with a stable outlook. That’s just above the BB “speculative” grade more commonly known as junk. The US ratings firm echoed analysts in pointing to “material execution risks amid a deteriorating and volatile economic and market environment.”

--With assistance from Allegra Catelli and Macarena Muñoz.