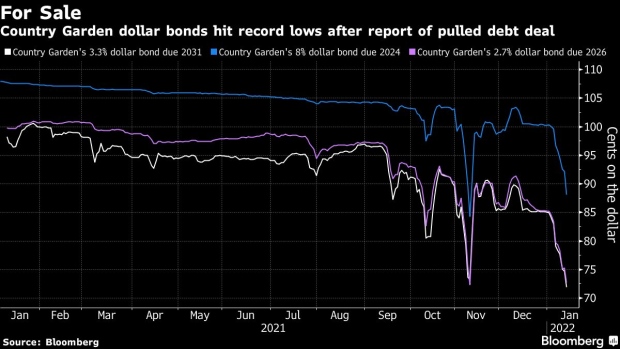 (Bloomberg) -- China’s largest developer Country Garden Holdings Co. is being impacted by the crisis surrounding the property sector with its shares and bonds coming under pressure amid fears that a reportedly failed fundraising effort may be a harbinger of declining confidence.

Another real-estate company, Guangzhou R&F Properties Co., was downgraded to restricted default by Fitch Ratings on Friday following its successful delay in repaying most of a $725 million dollar bond due the previous day.

A slew of China economic data is due today, and may show that fourth-quarter growth slowed to the weakest level in more than a year, with the pandemic hitting consumption and the property market in turmoil. Home prices fell for a fourth consecutive month in December.

Country Garden’s shares and bonds were hammered last week on concerns about confidence. The company is one of the few remaining large, better-quality private developers that had been largely unscathed by the liquidity crunch, even as peers such as Shimao Group Holdings Ltd. saw dramatic reversals in their credit ratings.

The firm is viewed as a bellwether for contagion risk, as unprecedented levels of stress in the offshore credit market threaten to drag good credits down with bad. With more than 3,000 housing projects located in almost every province in China, Country Garden’s financial health has immense economic and social consequences.

For Chinese developers, a turn of the calendar page hasn’t turned around their fortunes. Their dollar bonds have declined to new lows. It’s only mid-January, and Goldman Sachs has already raised its default forecasts for the year.

Strategists Kenneth Ho and Chakki Ting say stresses are piling up after the pick-up in proposals for bond exchanges or maturity extensions. They now expect a 19% default rate for high-yield developers, up from a previous estimate of 11.5%.

New home prices in 70 cities, excluding state-subsidized housing, slid 0.28% last month from November, when they dropped 0.33%, National Bureau of Statistics figures showed Saturday. Falling prices may dissuade homebuyers concerned about the value of their assets, making it harder for developers to sell properties and generate much needed cash.

Recent moves by authorities to ease some of the restrictions on real-estate funding have done little to boost the market. Home loan demand stayed weak in December, with households’ mid- and long-term loans, a proxy for mortgages, increasing the least since February 2020. Year-end sales campaigns by developers added to downward pressure on prices.