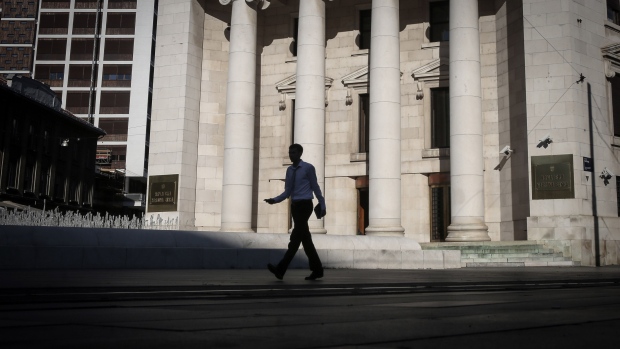 A pedestrian passes the Hrvatska Narodna Banka (HNB), Croatian National Bank, headquarters in Zagreb, Croatia, on Thursday, Aug. 20, 2020. The Adriatic nation and Bulgaria got the green light to join the pre-euro currency system last month, and now have at least two more years to prove they can comfortably meet membership requirements before making the switch. Photographer: Oliver Bunic/Bloomberg , Bloomberg

(Bloomberg) -- Croatia will probably meet all the required euro-entry criteria ahead of schedule as it still seeks to adopt the common currency in January 2023, according to central bank Governor Boris Vujcic.

The temporary suspension of the European Union’s deficit limits due to the pandemic should help his country clear the key hurdle for euro membership faster than anticipated, he said in an interview on Friday.

The Adriatic nation, which depends on tourism more than any other EU member, has been hit hard by travel restrictions imposed in the wake of the virus. While it’ll get back on track this year in lowering public debt, the budget gap will narrow less than expected due to the pandemic.

“We have a situation this year that the European Commission has suspended excessive deficit procedures for all member nations,” Vujcic said on the sidelined of a central bankers’ meeting in Rovinj, Croatia. “In this context, we have to regard the date of Croatia’s euro zone entry.”

There are no indications “at the moment” that the excessive deficit procedure will be introduced for Croatia, he said. Euro hopefuls need to prove that their public finances are sound, inflation is under control and the exchange rate is stable before they can make the currency switch.

Inflation in Croatia will remain under 2% this year and next, Vujcic said.

“Energy and food prices are the biggest one-time generator of inflation, but the question is how much of a long-term effect this will be,” he said. “Should inflationary expectations start to form, that could be a problem.”