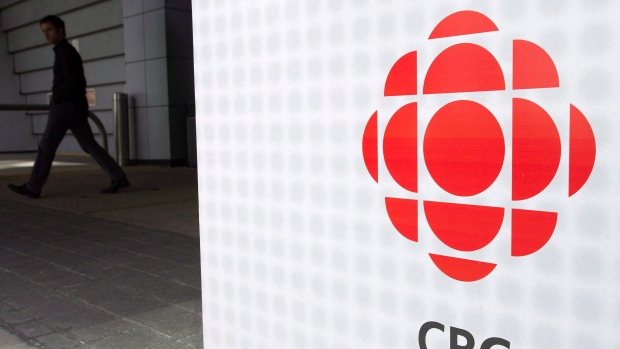 A man leaves the CBC building, in Toronto. , The Canadian Press

OTTAWA - Oversight and transparency took centre stage on Day 1 of a nearly three-week review of the Canadian Broadcasting Corp.'s broadcasting licences, as the rush to furnish digital content butts up against regulatory concerns.

The CBC is asking Canada's telecommunications regulator to renew licences for its various English- and French-language audio and audiovisual programming services.

Under the public broadcaster's application, that digital dexterity would leave it free of financial reporting obligations around online content, such as the CBC Gem streaming platform and CBC Listen app.

“If we do not move with our audiences, we risk becoming dinosaurs on a melting ice cap,” Tait said at the virtual hearing Monday morning.

She is asking the CRTC to renew its licences for five years, absent the regulatory scrutiny on digital content that applies to its radio and television programs.

“I know you don't like expenditure-based requirements,” he said.

“But from the commission's perspective, with greater regulatory flexibility there's a greater requirement for accountability and transparency from the corporation, and that has to come in some manner through reporting.”

The CBC has already faced pushback on its moves to commercialize its online fare.

In an open letter to the general public, they warned that a new marketing effort called Tandem will erode the integrity of CBC journalism, saying that paid content that resembles news is “insidious” and will “help advertisers trick Canadians.”

CBC management has insisted that editorial and advertising content would remain separate, and stressed a critical need to generate revenue amid big financial pressures.

The Friends of Canadian Broadcasting is recommending the CBC go a few steps further by following its radio service to become ad-free on television and online.

“They have also been very, very dodgy when it comes to transparency,” Daniel Bernhard, the group's executive director, said of CBC management in an interview.

“It's just an insane idea, that the Canadian public and our regulator have no business scrutinizing activities of the public broadcaster in the digital domain.”

Bernhard also called for more investment in local news as ad dollars fall away from traditional media and into the coffers of Google and Facebook, hollowing out regional journalism.

After prodding from the CRTC, the CBC revealed in June it planned to spend $332.7 million on digital services in 2020-21 - more than one-fifth of programming expenditures - compared to $1.26 billion on television and radio. CBC vice-president Marco Dube said Monday that online income accounts for only five per cent of total revenues.

CBC received $1.21 billion in federal funding in 2019-20 and took in $504 million in revenue - about half from advertising, mainly on TV. Since then the COVID-19 pandemic has dented ad sales despite viewership growth.

Online content from the CBC - like the streaming platforms Netflix, Spotify and Canadian-owned Crave - is exempt from the Broadcasting Act, which sets minimum thresholds for Canadian content as well as comedy, drama, local and children's programming.

The exemption gives digital services much more discretion in where they allocate their resources without having to disclose those decisions.

“On the one hand they're saying, 'Let us cut back that kind of programming on TV and radio,' but on the other we're not going to tell you how we're going to compensate for that on our digital platforms,” Jim Thompson, a spokesman for Friends of Canadian Broadcasting, said in an interview.

Proposed changes to the Broadcasting Act through Bill C-10, now before the House of Commons, aim to subject booming online streaming sites to the same rules as their legacy counterparts in Canada.

The CBC is requesting the so-called digital media exemption order remain until the bill is passed.

“Bill C-10 provides the basis for a proper, coherent approach going forward. We think it makes sense to wait until the act is amended,” said Bev Kirshenblatt, head of regulatory affairs at CBC/Radio-Canada.

Tait insisted the corporation will continue to fulfil its role as a public broadcaster with a wide range of online content - all Canadian productions aired on TV are also available on Gem - and no need for disclosures.

“I had a former CEO that used to always say, `What gets measured gets done,”' Scott replied.

Seventy interveners are scheduled to begin presentations to the CRTC on Friday and continue over eight days until Jan. 26, followed by a CBC response on Jan. 27.

The Canadian Media Producers Association will make the first presentation. Others include the Canadian Olympic Committee, Quebecor Media Inc., Friends of Canadian Broadcasting and the Office of the Commissioner of Official Languages.