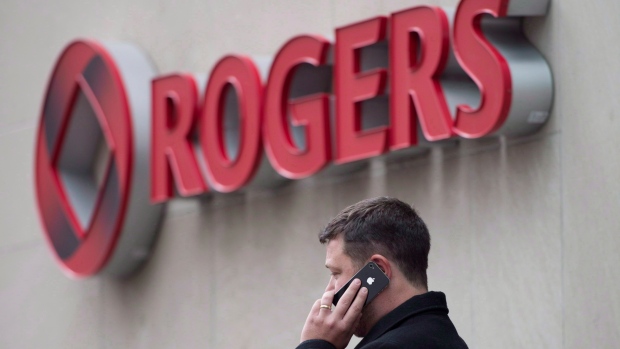 A man speaks on a mobile phone outside Rogers Communications Inc.'s annual general meeting of shareholders in Toronto on April 22, 2014. , THE CANADIAN PRESS/Darren Calabrese

TORONTO -- The Canadian Radio-television and Telecommunications Commission is indicating that the country's three dominant wireless carriers may be required to provide smaller competitors with easier access to their national networks.

The CRTC's message this week comes just days after the Trudeau government signalled it will replace a 2006 policy that puts more emphasis on infrastructure investments and "market forces" than on regulation or consumer affordability.

The federal telecom regulator said Thursday it has officially begun its long-promised review of Canada's mobile wireless market with the "preliminary view" that there should be more opportunity for mobile virtual network operators (MVNOs).

The CRTC -- which promised last year that it would begin a major review of wholesale wireless rates and access in 2019 -- is apparently suggesting that smaller operators need a guarantee they can connect with the bigger networks.

Supporters of MVNOs -- which pay for wholesale access to wireless networks where they haven't installed their own facilities -- argue that consumer prices will fall if the large carriers face more competition.

However, wholesale resellers -- whether offering wireless, internet or phone services -- have been at a disadvantage in Canada because of the regulatory emphasis on investments in networks and reliance on "market forces" to set prices.

Smaller network operators have complained that -- when there are only three companies with national wireless networks and they are large enough to dictate prices -- it's too expensive for smaller companies to enter the competition.

Matt Stein, chairman of the Canadian Network Operators Consortium of internet providers, said Friday that "we've . . . been prevented from offering mobile phone services because of the lack of regulation that enables us to do so."

"I would say, with the events of this week behind us, that's clearly set to change."

Stein said it would be feasible for an internet service provider like Distributel -- where he's CEO -- to move into the wireless business if the national carriers are required to provide wholesale access at a reasonable price.

"With the mandating of MVNOs, what the CRTC would be doing is creating an environment where (smaller carriers) could become a mobile phone company without having to build towers all across the country," Stein said.

However, given the slow pace of Canada's telecom regulator -- which takes months or years to make decisions after allowing interested parties to express and then refine their opinions  -- a MVNO policy won't come until next year.

Canadian carriers and interested persons have until May 15 to notify the commission that they want to take part in the proceedings. Further preliminary steps will continue through to Oct. 23 and a public hearing will begin Feb. 12, 2020.

The CRTC said it's seeking public comment about whether MVNOs "should have mandated access to the networks of the national wireless providers (Bell Mobility, Rogers and Telus) until they are able to establish themselves in the market."

It's also looking at whether regulatory measures are needed to facilitate the deployment of 5G wireless networks, which are expected to become the next major advance in telecommunications over the next decade.

CRTC chairman Ian Scott said in a statement on Thursday that "we want to ensure that all Canadians benefit from a robust and competitive mobile wireless market that provides a choice of affordable and innovative services."

Scott's statement follows statements from Navdeep Bains, the minister responsible for telecommunications, who said Tuesday that he had begun a months-long process to give the CRTC a new policy directive.

Competition is already one of the CRTC's long-standing criteria, as are consumer interests and innovation.

However, the current policy -- established under the Harper Conservative government while Maxime Bernier was the minister responsible for telecommunications -- sets a different order of priorities for the CRTC to meet.

Under Bernier -- who split with the Conservatives last fall and now leads the People's Party of Canada -- the CRTC was instructed to "rely on market forces to the maximum extent feasible" and to interfere "to the minimum extent necessary."

However, various studies and consumer anecdotes have said Canadians pay significantly higher prices for many telecommunications services compared with consumers in other countries.

The new policy proposed by the Trudeau Liberals begins with "encourage all forms of competition" and includes "foster affordability and lower prices" and reduce barriers for new and small service providers.