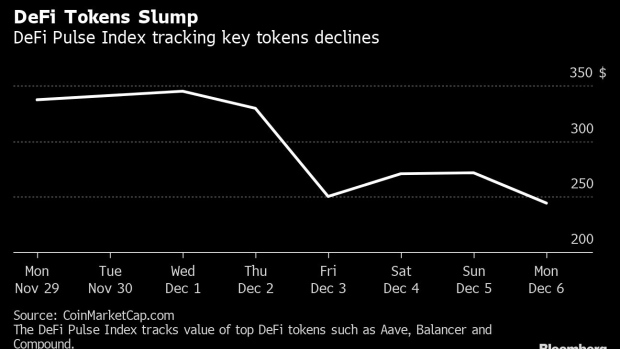 (Bloomberg) -- This weekend’s crypto flash crash helped to bring into focus the recent cooling of decentralized finance, once one of the hottest corners of the digital asset world.

While Bitcoin and other rival coins have mostly steadied or climbed from lows of about 20% seen Saturday, many DeFi tokens tumbled more and have since failed to rebound. The DeFi Pulse Index, which tokens such as Aave, Balancer, Compound, Sushi, Synthetix, Uniswap, Yearn and Badger, dropped as much as 24%.

The slide comes on top of recent poor performance for the tokens related to decentralized-finance applications -- services that let people lend, borrow and trade directly, without intermediaries like banks. The DeFi Pulse Index has dropped 62.5% over the past seven months. By contrast, even after its latest slump, Bitcoin is still up from mid-May.

“DeFi has been out of favor and underperforming other sectors for most of the past six months, and that didn’t change over the weekend,” said Jeff Dorman, chief investment officer at Arca. “What’s different is that other tokens bounced much faster, whereas DeFi stayed depressed.”

To be sure, the total value of invested money locked in the apps -- a measure of usage -- is up 12%, to nearly $100 billion, since mid-May, according to tracker DeFi Pulse. The services are aimed partly at the world’s 1.6 billion unbanked, who don’t have access to traditional, centralized financial services. But many investors have moved on to investing into coins tied to non-fungible tokens -- often digital art -- or games.

DeFi has been walloped harder in part because many of the tokens have a very small group of holders, said Simon Judd, head of business development for Index Coop, which runs a Defi index fund.

“Many of the DeFi tokens have very low liquidity,” said Judd. “So even a little sell pressure has an outsize effect.”

DeFi’s wounds are partly also self-inflicted. BadgerDAO, which lets people earn interest on Bitcoin, got hacked last week. The exact amount of damage is unclear. One researcher claimed it could be as much as $120 million. Meanwhile at Sushi, there’s infighting among developers that’s adding to the uncertainty.

Concern about a potential regulatory crackdown is cooling enthusiasm for DeFi as well. The Financial Action Task Force, which makes anti-money-laundering rules followed by governments worldwide, recently called for increased oversight of DeFi apps. While many of them claim to be run by their communities, FATF said government could hold developers working on an app responsible for not conducting customer identity checks and enforcing anti-money-laundering policies. Today, most DeFi apps let customers be anonymous. U.S. state and federal regulators have recently gone after DeFi apps like BlockFi, saying their savings-account-like products violate laws.

“Non-bank financial intermediaries (NBFIs) can make the financial system more efficient but also more unstable,” BIS, which acts as the bank for central banks, said in its December report released Monday. And that instability trickles down into token valuations as well.