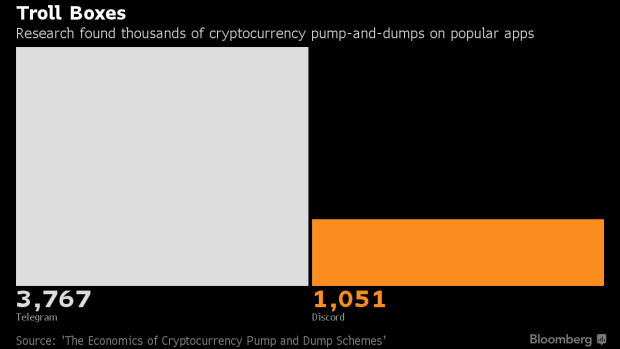 A bitcoin token, left, a litecoin token, centre, and an ethereum token, sit in this arranged photograph in Danbury, U.K., on Tuesday, Oct. 17, 2017. On Wednesday, billionaire Warren Buffett said on CNBC that most digital coins won't hold their value. Photographer: Chris Ratcliffe/Bloomberg , Bloomberg

(Bloomberg) -- Scammers have been successfully manipulating the price of digital assets including Bitcoin so they can dump their holdings onto unsuspecting traders at a higher price, according to a new academic paper mapping out the extent of market abuse in cryptocurrencies.

Researchers identified 4,818 so-called pump-and-dump attempts between January and July, using data scraped from Telegram and Discord, two encrypted messaging apps popular with the cryptocurrency community. The scale of the fraud is “widespread and often quite profitable,” and should alarm regulators, according to the draft published in SSRN, a repository of academic research.

“The proliferation of cryptocurrencies and changes in technology have made it easier to conduct pump and dump schemes,” academics from the University of Tulsa, University of New Mexico and Tel Aviv University wrote. “While the fundamentals of the ruse have not changed in the last century, the recent explosion of nearly 2,000 cryptocurrencies in a largely unregulated environment has greatly expanded the scope for abuse.”

Many of the groups attempting to manipulate crypto markets do not hide their goals, the paper said, attributing this to a regulatory vacuum.

The study gives further ammunition to calls for tighter regulation of cryptocurrencies. The Securities and Exchange Commission recently cited concerns about manipulation as a worry that must be addressed before it approves a Bitcoin exchange-traded fund, which proponents believe will usher in widespread adoption of digital currencies.

In May, the U.S. Justice Department opened a criminal probe into whether traders are manipulating the price of Bitcoin and other cryptocurrencies, dramatically ratcheting up scrutiny of the space.

Read more about why professional investors are abandoning bitcoin trading

Pumping obscure coins with low volume is “much more profitable than pumping the dominant coins in the ecosystem,” the researchers found. However, Bitcoin, the most well-known cryptocurrency, was also targeted in separate 82 manipulation efforts. “Bitcoin is not immune from the pump-and-dump phenomenon,” the authors said.

After a speculative bubble in digital assets burst last December, markets have pummeled Bitcoin, which has lost more than 70 percent of its value this year.

To contact the editors responsible for this story: Christopher Anstey at canstey@bloomberg.net, Cormac Mullen, Ravil Shirodkar