Cryptocurrencies have gone mainstream, so what’s next? - BNN Bloomberg
{{ currentBoardShortName }}
Markets
As of: {{timeStamp.date}}
{{timeStamp.time}} 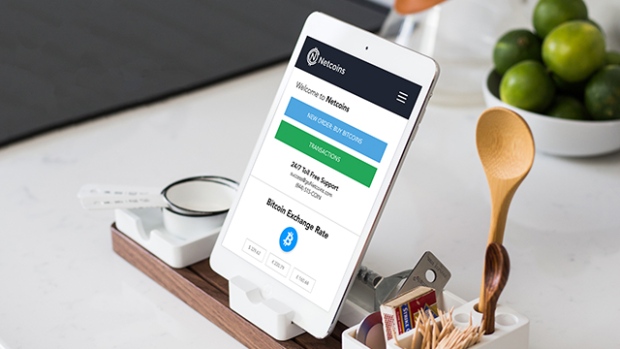 The headline numbers for Bitcoin in late 2017 underscore the feeding frenzy surrounding cryptocurrencies. With a single Bitcoin trading for almost US$20,000 at the end of last year, the cryptocurrency market had a value of $830 million.

Brutal volatility ensued, with cryptocurrencies losing almost 70 per cent in value in the span of just a few weeks. Bitcoin’s price remains historically high, though, and has recently been trading above US$8,000.

The price underscores just how popular and mainstream cryptocurrencies have become. And yet, a huge amount of confusion remains about how to buy and sell them.

Into this breach has stepped Netcoins Inc. (listed under GAR Limited) (CSE: NETC), a company determined to remove the transactional friction preventing the general public from fully participating in the crypto boom. Netcoins is an app-based system that turns almost any digital device into a cryptocurrency ATM.

A Simple Way to Buy and Sell Cryptocurrencies

Netcoins offers those interested in owning cryptocurrencies the opportunity to do so through trusted sources, such as retailers, currency exchanges, financial institutions, and even banks.

Netcoins Co-Founder and VP Technology Michael Vogel comments, “The on-ramp and off-ramp for Bitcoin has been lacking. Bitcoin is easy to use, but it’s difficult to buy, even in 2018. We’re helping people buy and sell Bitcoin, using this physical world model.”

The model features a familiar retail experience that scales extremely well and is much faster than a typical online transaction. Customers have shown a preference for buying Bitcoin in-person, as opposed to through a peer-to-peer exchange on the internet.

The company believes that its product has the ability to transform cryptocurrencies by tapping the estimated 95 per cent of the population that has yet to venture into the crypto market.

Netcoins is growing rapidly, with a current run rate of over C$5 million per quarter. The company currently boasts over 19,000 ATM locations through its Netcoins virtual ATM and partnerships with Flexepin and VoPay.

Vogel noted, “We have inbound interest — people who are looking for a way to buy bitcoin, and then decide to use our software to open their own Bitcoin ATM network. We also get a lot of interest from entrepreneurs that have previously set up a physical ATM in their city. Also, our sales team works outbound to setup stores we think Netcoins would be a good fit for.”

In a world where physical Bitcoin ATMs can charge up to 12 per cent in transaction fees, the Netcoins virtual ATM (with a five to eight per cent mark-up) offers consumers a lower-cost, easier-to-execute method of buying and selling Bitcoin. Plus, funds transferred through online crypto exchanges can take over a week to be available for trading and have proven difficult for non-techies to navigate.

And from a retailer’s perspective, having a Netcoins ATM is a win-win scenario. As Vogel notes, “Retailers benefit from commissions, but they also get a spin-off sales effect. The same rationale for having a regular ATM in a store holds for Netcoins. Retail is a competitive space, and Netcoins offers retailers another way to get people in the store and earn commissions selling Bitcoin.”

In addition to expanding the Netcoins virtual ATM network, both domestically and internationally, Netcoins has also established over-the-counter (“OTC”) and brokerage models for its service.

The OTC model offers the speed to lock in a price in real-time, the white-glove service of phone ordering, and the flexibility to handle large orders, multiple coins, and both buy and sell transactions.

The brokerage model under development would require zero crypto knowledge and allow investors to access cryptocurrencies from their traditional brokerage accounts. Again, investors would be granted the speed to lock in their price in real-time and to set order limits.

Netcoins management team is also in the process of making Netcoins’ virtual ATM available for additional cryptocurrencies and two-way transactions via retail. The company is forecasting C$77.6 million in transactional revenues for 2018.

Part of that strategy will target specific verticals. In addition to retail, the company is also pursuing relationships with currency exchange stores and financial advisors. “Another market is the gold and silver market and gold and silver dealers. Those types of customers understand the Bitcoin value proposition,” Vogel adds.

With a simple, transactional model that’s imminently scalable, the sky would appear to be the limit for Netcoins. As the market for Bitcoin and other cryptocurrencies continues to evolve, this company has the potential to transform the market by opening it up to a much wider audience.