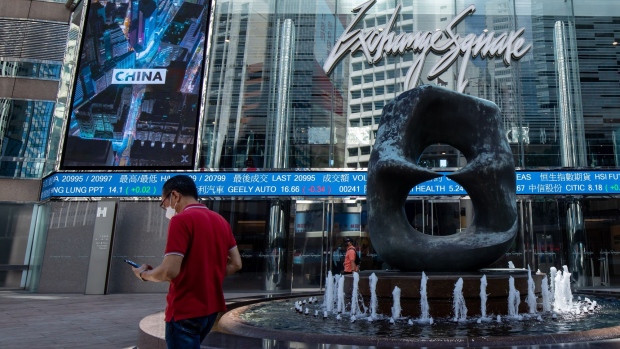 (Bloomberg) -- China Tourism Group Duty Free Corp. is seeking to raise as much as HK$17 billion ($2.17 billion) by selling shares in Hong Kong, in what could be the city’s biggest offering this year.

The world’s largest retailer for travelers, which is already listed in Shanghai, will start taking investor orders for about 102.8 million Hong Kong shares at between HK$143.5 and HK$165.5 each, according to terms of the deal seen by Bloomberg News. The deal has attracted nine cornerstone investors including China State-Owned Enterprise Mixed Ownership Reform Fund.

The order book was said to be fully covered as of 10:42 a.m. Hong Kong time, according to people familiar with the offering. CTG Duty Free did not immediately reply to a request for comment.

The offering by the state-controlled operator of duty-free outlets gives a boost to the ailing IPO market in Hong Kong, which has hosted only one such offering larger than $1 billion this year. Large deals have mostly vanished from traditional venues as soaring inflation and rising interest rates weakened prospects for fundraising. Moreover, crackdowns by Beijing on industries including technology, education and property have raised the pressure on Chinese issuers.

CTG Duty Free suspended a potential $5 billion listing last December, joining a slew of companies that chose not to move ahead with deals amid a choppy market. The seller of tax-exempt goods such as tobacco, wine and perfumes to travelers considered reviving the listing plan to seek as much as $3 billion, Bloomberg News reported in June.

At the top of the range, the listing is set to be the largest in Hong Kong in about 15 months. CTG Duty Free’s offering lured nine cornerstone investors that combined are willing to snap as much as $795 million in shares, or about 46% of the offer, the terms show.

Books are open from Friday to Aug. 18, when shares are expected to be priced. The first day of trade is slated for Aug. 25.

(Adds detail on demand to third paragraph and chart)