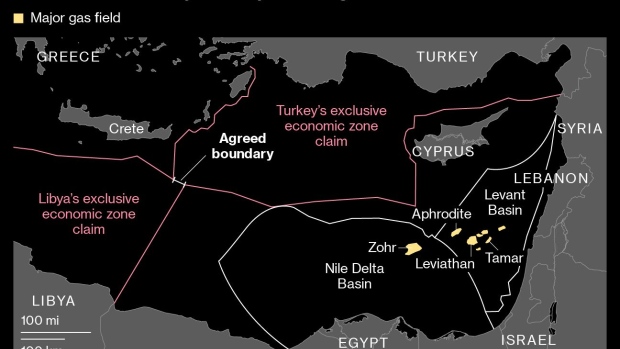 (Bloomberg) -- Turkey is taking advantage of worsening relations between Russia and the North Atlantic Treaty Organization to push for more influence in the eastern Mediterranean and most other countries have failed to react, Cyprus’s president said.

“Turkey feels unrestrained given U.S. efforts to keep the country in the western alliance,” President Nicos Anastasiades said in an interview in Nicosia.

While sparring between Turkey and the U.S. has complicated relations in the 29-member military pact, NATO officials have insisted that keeping Turkey in the alliance is in everybody’s interest.

Turkish President Recep Tayyip Erdogan may therefore feel he has a free hand. The international community hasn’t acted to counter Turkey’s moves in Syria, Libya, Iraq and Cyprus’s exclusive economic zone, or its plan to open up the walled-off town of Varosha in Cyprus’s Turkish-controlled north, Anastasiades said.

“There’s no decisiveness from countries to take appropriate measures and this raises the danger of conflict,” Anastasiades said, noting that France is the only country that’s taken an active role in the region.

French and Cypriot forces conducted maneuvers in the eastern Mediterranean late last year, while Paris has dispatched naval vessels to Syria and sent an aircraft carrier to the region. The Cypriot president will meet with France’s defense minister on Tuesday.

Tensions in the region go beyond military posturing, commercial issues are at stake too. A pledge by Erdogan to send Turkish troops to bolster the United Nations-backed government in Libya has upset the delicate balance of power in the region at a time when countries are jostling over lucrative hydrocarbon resources in the waters around Cyprus.

EU foreign ministers agreed on Monday to deploy military assets to enforce a weapons embargo on Libya and prevent the shipment of arms to the country’s warring factions, diplomats familiar with the matter said.

While a maritime deal Erdogan signed in November with Libya prompted Turkey to claim maritime rights in some zones Athens says are Greek -- a provocation, Anastasiades said -- Cyprus will proceed with its hydrocarbon exploitation program. International energy companies present on the island will act to protect their interests, he said, assuring that the project will go ahead.

Both Turkey and the breakaway Turkish Republic of Northern Cyprus -- recognized only by Ankara -- accuse the internationally accepted Republic of Cyprus of unilaterally conducting hydrocarbon exploration.

Reunification of the island, divided since Turkey invaded the northern third in 1974, will ensure future peace and bring significant economic benefits, Anastasiades said. Turkey should understand that reunification can be achieved only through constructive engagement, the Cypriot president said.

Cyprus has some concerns about the next proposed EU budget, Anastasiades said.

Under the plan, “Cyprus will see a significant decrease in EU cohesion funds and asylum, migration and integration funds,” the president said. “We’re hopeful that there will be some corrections.”

Despite the island’s historical ties to the UK, Anastasiades said he’s not optimistic about an easy transition to post-Brexit relations for the EU.

“There are more chances not to have an agreement between the EU and the U.K. this year than there are to have one,” Anastasiades said. “The EU must ensure that its members won’t be in a worse position” under a final deal.

To contact the reporters on this story: Georgios Georgiou in Nicosia at ggeorgiou5@bloomberg.net;Paul Tugwell in Athens at ptugwell1@bloomberg.net

To contact the editors responsible for this story: Sotiris Nikas at snikas@bloomberg.net, Jerrold Colten, Ben Sills