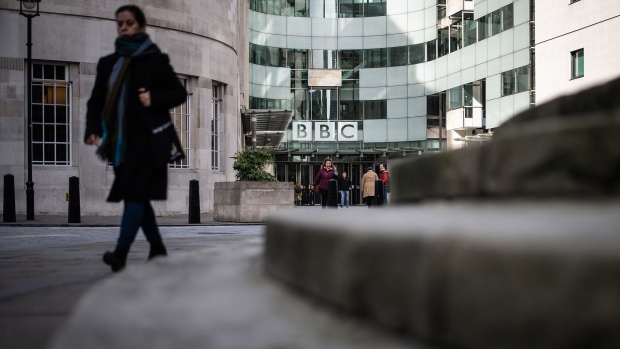 LONDON, ENGLAND - FEBRUARY 05: A general view of the exterior of BBC Broadcasting House on February 05, 2020 in London, England. The BBC has announced that it will be increasing the cost of the license fee by £3 from April 1, 2020. The issue of whether non-payment of the TV licence fee should remain a criminal offence is to be considered after Culture Secretary Nicky Morgan launched a public consultation into the annual payment. (Photo by Leon Neal/Getty Images) , Photographer: Leon Neal/Getty Images Europe

Dowden’s remarks came after the U.K. weekend papers were filled with speculation over who will lead the British Broadcasting Corp. and Ofcom. The Sunday Times, Sunday Telegraph, Observer and Mail on Sunday all reported that Dacre is Prime Minister Boris Johnson’s favored candidate for Ofcom, with Moore tipped for the BBC job.

“I’m not going to get drawn into conversations about each of the candidates, clearly there are strengths to both,” Dowden told Sky News. He emphasized that “everyone is getting a little bit ahead of themselves” and that the government would shortly be starting the recruitment process for both roles.

Both Moore and Dacre have been critical in the past of the BBC, suggesting the national broadcaster should brace for reforms if the men are recruited. The potential appointments of two right-wing figures in key national media roles also raised hackles in the opposition Labour Party.

“The BBC and Ofcom are integral to our national interests: Ofcom regulates the BBC and they should be free from political interference,” Labour’s spokeswoman on culture and media, Jo Stevens, told Sky. “They should be impartial, and specifically trailing these appointments is quite worrying.”

Dowden said the BBC needs a “strong, big person” who can hold it to account. He said the broadcaster needs to ensure it has “genuine impartiality,” that it adapts to the future as television moves from analog to digital, and that it “represents all parts of our nation, not just narrow metropolitan areas.”