Daimler AG said early-year growth for its main Mercedes-Benz division will be erased by the global semiconductor shortage that the luxury-car maker expects to put a damper on the second half.

Mercedes car sales are now expected to be roughly flat this year rather than up significantly from 2020. The lack of chips will have an adverse impact on the business as the year progresses and visibility on how supply will develop is low, Daimler said Wednesday.

The automaker’s shares fell 1.4 per cent as of 9:50 a.m. in Frankfurt, paring an earlier decline of a much as 4 per cent. The stock is still up about 19 per cent for the year. 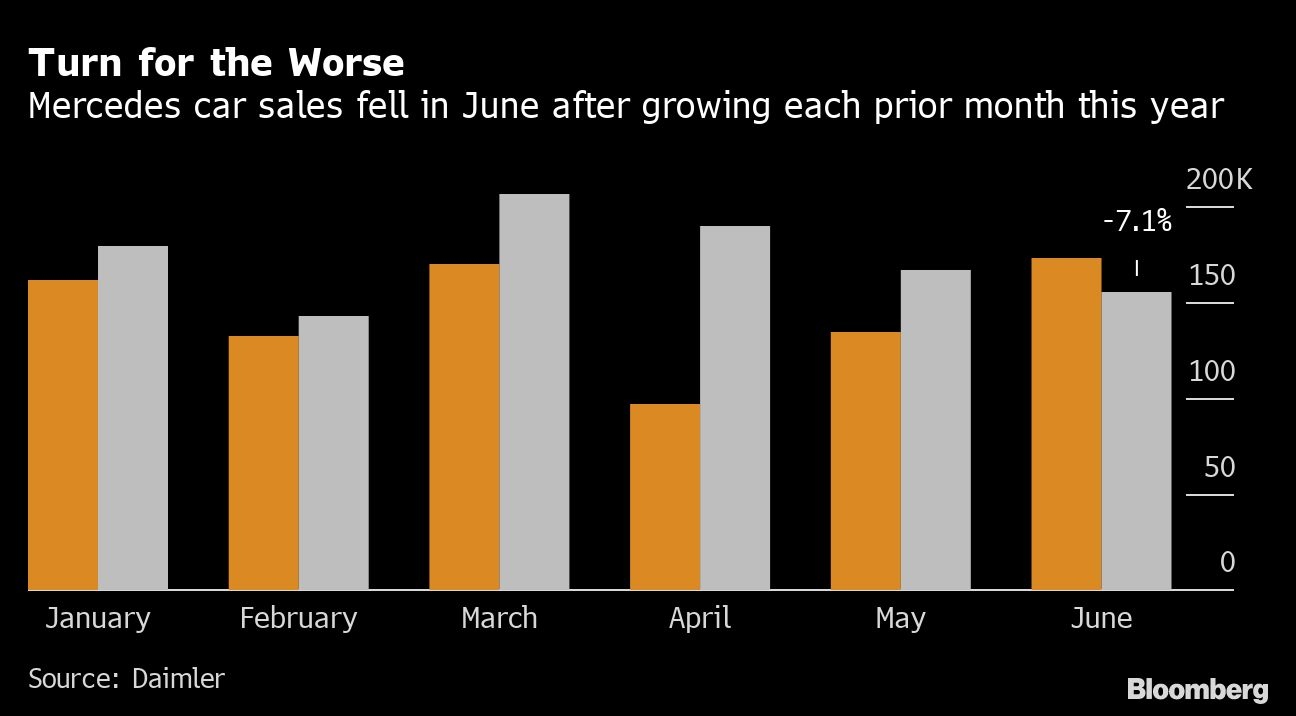 Rivals from Volkswagen AG to Jeep maker Stellantis NV have coped with the scarcity of chips better than initially feared, but also warned the issue will affect earnings later this year. Facing limitations on just how many assembly lines they can keep running, automakers are prioritizing output of their biggest money makers and abstaining from discounts customers are accustomed to even from luxury brands.

“The entire industry is currently struggling with longer delivery times, which unfortunately also affect our customers,” Chief Executive Officer Ola Kallenius said. “We are doing what we can to minimize the impact.”

BMW AG, which has said it expects a “solid” increase in deliveries to customers this year, outsold Mercedes by more than 26,000 units in worldwide second quarter sales and took over the pole position in the U.S. because of better access to chip supply.

Sales in the current quarter might be below the second quarter and could stabilize in the fourth quarter if no additional bottlenecks occur, Daimler’s Kallenius told analysts.

Despite the semiconductor shortage, Daimler’s second-quarter revenue came in better than analysts expected, climbing 44 per cent to 43.5 billion euros (US$51.2 billion). The manufacturer also slightly raised the outlook for margins at its trucks and buses unit and mobility division.

Daimler had forecast in April that Mercedes will be more profitable than it’s been in years, thanks to resurgent vehicle demand in the midst of the pandemic. At the time, the company raised its projection for annual return on sales for its cars and vans division to 10 per cent to 12 per cent, up from 8 per cent to 10 per cent.

Executives were more somber this quarter, warning headwinds from raw material prices are poised to intensify in the second half and the company might not be able to compensate for this with efficiency gains like in the first six months.

Daimler’s Mercedes Ebit margin now appears to be on a downward 2H trajectory, given lower unit sales expectations, raw-material headwinds and the ramp-up of lower-margin BEV sales, in a move likely to be mirrored by German peers who still have to report.

The Stuttgart-based manufacturer said a plan to spin off its sprawling truck division is on track to be completed before the end of the year. Mercedes will update investors on plans for battery technology and its growing lineup of electric vehicles on Thursday.

Mercedes this year revved up its EV rollout with the new EQS sedan, the battery-powered sibling to its flagship S-Class, as traditional carmakers broaden their attack on Tesla Inc. The company will be making eight fully electric cars on three continents next year. It flanked the EQS with the compact EQA and plans to unveil the electric version of its bestselling E-Class sedan later this year.