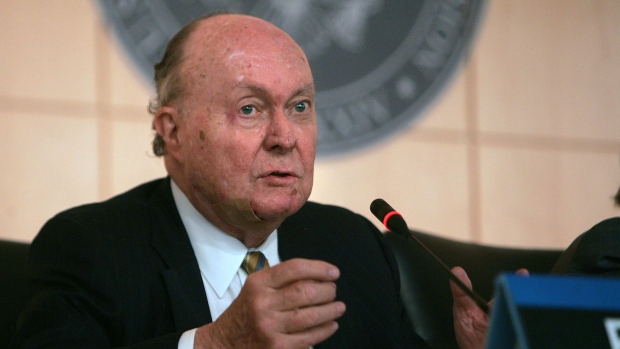 David Ruder, a former chairman of the U.S. Securities and Exchange Commission whose off-the-cuff comments may have fanned panic selling on what became known as Black Monday, has died. He was 90.

He died on Feb. 15, according to Northwestern University, where he served as dean of the law school from 1977 to 1985. No cause was given. Jay Clayton, the current SEC chairman, said in a statement on Twitter that Ruder was “a great chairman and constant contributor to the SEC for over 30 years.”

As head of the SEC from August 1987 through September 1989, Ruder presided over the final phase of the agency’s insider-trading investigation of Ivan Boesky, Michael Milken and Drexel Burnham Lambert Inc. He also steered the agency away from the anti-regulatory course it had taken during Ronald Reagan’s first six years as president.

A longtime professor of corporate and securities law at Northwestern, Ruder was Reagan’s pick to succeed John S.R. Shad, a former vice chairman of E.F. Hutton & Co. who had led the SEC from 1981.

Ruder was in his third month as SEC chairman when markets around the world plunged on Oct. 19, 1987. The Dow Jones Industrial Average would end the day down 22.6 per cent, having lost 508 points.

That morning, Ruder delivered remarks to a conference of the American Stock Exchange in Washington. Afterward, he met with reporters seeking his reaction to what was happening in equity markets.

“I’m afraid to say that there is some point, and I don’t know what that point is, that I would be quite anxious to talk to the New York Stock Exchange about a temporary, and very temporary, halt of trading,” he replied in part, according to an Associated Press account.

Dow Jones, the first news service to report his comment, at 1:09 p.m, rendered it slightly differently: “There is some point, and I don’t know what that point is, that I would be interested in talking to the New York Stock Exchange about a temporary, very temporary, halt in trading.”

There would be no such halt, and Ruder was criticized for mentioning it as a possibility, which may have caused nervous investors to believe they had to race to sell shares before the market closed.

“By 1:25 p.m., the Dow Jones news wire quoted the SEC as stating that it was not discussing closing the stock markets,” the presidential task force that investigated the market crash wrote in its final report. “However, the uncertainty created by the possible inability to sell may have exacerbated the dramatic selling pressure.”

At a hearing three weeks after the crash, Senator William Proxmire, a Wisconsin Democrat who led the Senate Banking Committee, asked Ruder whether it would have been wiser not to talk publicly about a halt to trading.

According to a Washington Post account of the hearing, Ruder explained that when he spoke to reporters on Oct. 19, he “did not have in my consciousness what sort of day it would be.”

Ruder told the New York Times in January 1988: “You want to deny that you caused the market to drop. You want to defend yourself. But the proper response would be to say that I made a mistake talking about the market and I would not do it again.”

Arthur Levitt, who was chairman of the American Stock Exchange at the time and later would serve as SEC chairman, said of Ruder: “It’s funny how one event can mark a chairman. It’s unfortunate, because he was a very solid chairman, very thoughtful, very balanced. He came out for the right things.” Levitt is a board member of Bloomberg LP, the parent of Bloomberg News.

Under Ruder, the SEC studied what happened to stocks, options and futures throughout the tumultuous month of October 1987. It identified how “new institutional trading mechanisms and strategies in this linked market can cause extraordinary peak volume and volatility,” Ruder said in a 1988 speech.

Throughout his term at the SEC, and for years after, Ruder urged that the agency be given more money and authority.

He failed in a bid to wrest authority over commodity-index futures from the Commodity Futures Trading Commission. In 2008, he joined with two other former SEC chairmen, Levitt and William Donaldson, to caution against weakening the SEC while reforming financial regulation following the housing and credit crisis.

“The problem with the SEC today is that it lacks the money, manpower and tools to do its job,” they wrote.

David Sturtevant Ruder was born on May 25, 1929, in Wausau, Wisconsin, the son of an attorney. He graduated from Williams College in 1951 and, after service in the U.S. Army, earned his law degree in 1957 from the University of Wisconsin.

After practicing law in Milwaukee for four years, he became a professor at Northwestern’s law school, known today as Northwestern Pritzker School of Law. During his time as dean, the law school attracted a pool of highly talented professors and built a US$25 million building.

The SEC chairman’s post opened up when Shad became U.S. ambassador to the Netherlands. Reagan, hoping to keep the agency focused on enforcement matters, reportedly offered the job first to Rudolph Giuliani, who was then the U.S. attorney in Manhattan, and then to Nicholas Brady, chief executive of the investment firm Dillon Read & Co. They turned it down.

Ruder didn’t fully share the president’s zeal for deregulation, especially after the market crash early in his tenure.

“I definitely believe that I am more regulatory than my predecessor,” Ruder told the Times in January 1988. “I find myself voting more clearly for intervention by the commission into all kinds of activities, particularly in the enforcement area.”

Ruder called the SEC, with its US$135 million budget, “a peanut agency, in terms of budget size, doing a giant’s job,” during a congressional hearing in September 1988.

That same month, the SEC sued Drexel and four of its officials, including Milken, for insider trading and stock manipulation, following a long-running investigation that had begun under Shad. In a settlement with the SEC and the Justice Department, the firm agreed to pay US$650 million in fines and to remove Milken as head of its junk-bond unit. Milken would serve two years in prison; Drexel filed for Chapter 11 protection in February 1990.

Ruder stepped aside in 1989, making room for Richard Breeden, President George H.W. Bush’s pick to lead the SEC. Ruder returned to Northwestern, where he became a professor emeritus in 2005. From 1999 to 2010 he led the Mutual Fund Directors Forum, which represents independent fund directors.

Ruder was married three times and had four children and two stepchildren.