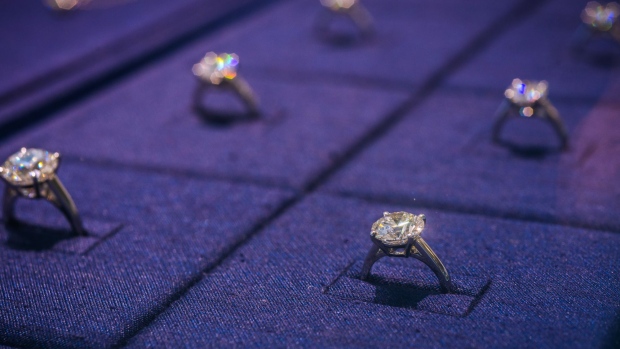 Diamond rings are displayed in a cabinet inside a De Beers SA store in Hong Kong. Photographer: Calvin Sit/Bloomberg , Bloomberg

De Beers implemented its biggest price increase for diamonds in years as the industry starts bouncing back from the pandemic-induced shutdown.

The world’s biggest diamond producer raised prices by about 5 per cent at its first sale of the year, according to people familiar with the situation who asked not to be identified because the information is private. The increases mostly applied to stones bigger than 1 carat, the people said.

The diamond industry has surprised many by the speed of its recovery after being brought to a complete standstill in the first half of last year. Crucial holiday sales in the U.S. and China were strong, while a shortage of stock held by industry middlemen created strong demand.

De Beers doesn’t publicize price changes, but it’s probably one of the steepest increases since the early part of last decade, the people said. A spokesman for De Beers declined to comment.

There were signs of recovery in the fourth quarter of 2020 as rough-diamond buyers started replenishing stocks to prepare for the industry’s most important selling period: Thanksgiving to the Chinese New Year. De Beers’s business started rebounding, and the Anglo American Plc unit was able to edge prices higher in the last sale of the year in December.

That’s in stark contrast to the industry’s fortunes at the early stages of the pandemic, when sales collapsed, and diamond retailers and factories closed. De Beers responded by curtailing production, leading to a tighter supply just as shoppers returned to stores in parts of China and the U.S.