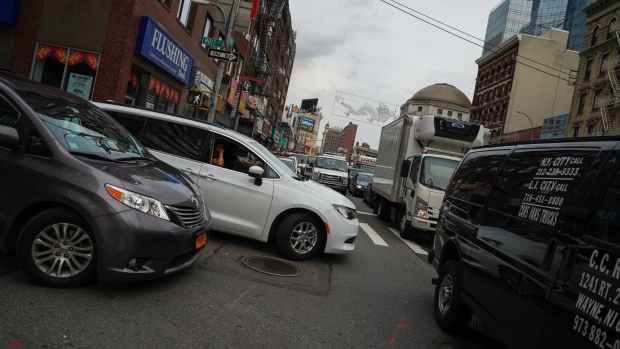 Traffic develops ahead of the July 4th weekend in the Chinatown neighborhood of New York, U.S., on Friday, July 2, 2021. More than 47.7 million Americans will take to the nation’s roadways and skies this Independence Day (July 1–5), as travel volumes are expected to nearly fully recover to pre-pandemic levels, AAA reports. Photographer: David Dee Delgado/Bloomberg , Bloomberg

(Bloomberg) -- New York City Mayor Bill de Blasio is amping up calls for congestion pricing to combat traffic in increasingly congested streets and encourage a faster return to mass transit amid the recovery from the pandemic.

“There is clearly a problem of too many people in cars,” de Blasio said in a press conference at City Hall on Wednesday. “Congestion pricing should be expedited by the federal government, the state government, MTA. I don’t see that, I don’t know why they’re not doing it.”

Traffic logged on the city’s tunnels and bridges was about 3% above pre-pandemic levels on Monday, according to data from the Metropolitan Transportation Authority. Meanwhile, the subway system is slowly reviving, with ridership of about 2.3 million that day, roughly 47% below pre-pandemic levels.