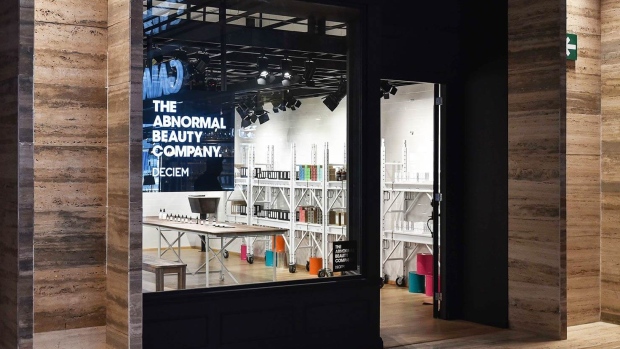 TORONTO -- The founder of Deciem, the self-professed "Abnormal Beauty Company," saw his reign at the Toronto cosmetics brand come to an unusual end on Friday.

Brandon Truaxe was ousted from his role as the company's chief executive and board member on an interim basis after a judge approved an Ontario court application from Estee Lauder Companies Inc., which holds a one-third stake in Deciem.

New York-based Estee Lauder pushed for Truaxe to be removed from the company, barred from "issuing statements or circulating media" on Deciem's social media accounts and restricted from talking to the company's employees or making personnel and business changes to Deciem.

In its application, Estee Lauder said its fight to oust Truaxe was fuelled by hundreds of "outrageous, disturbing, defamatory, and/or offensive posts" he made on Deciem's social media pages over the last year that "harmed" the business and its reputation.

Estee Lauder pointed to a weekend Instagram post from Truaxe, where he announced Deciem operations would be shutting down until further notice and alluded to criminal misconduct.

"Please take me seriously," he said, in the video that tagged dozens of celebrities and well-known brands including U.S. President Donald Trump. "Almost everyone at Deciem has been involved in a major criminal activity, which includes financial crimes and much other. You have no idea what a soldier I have been for 13 years."

Mark Gelowitz, a lawyer representing Estee Lauder, said Truaxe's Instagram posts and his decision to close the business had caused notices of breach from landlords, concerns from suppliers and legal claims from employees to start "piling up."

"He has essentially lit the company on fire," he told a judge. "Maybe he was once a diabolical marketing genius building the brand...but he's gone too far."

Judge Michael Penny, who granted the requests, also approved the company's demand for PricewaterhouseCoopers LLP to be appointed to investigate Truaxe's claims of criminal activity and report on Deciem's financial condition to its board of directors.

Truaxe and Deciem did not respond to requests for comment. Cusano's lawyer Derek Bell said in court that his client "wholly shares (Estee Lauder)'s concerns" and would not be arguing against the company's requests. Deciem's lawyer appeared in court, but said the company had not instructed him with how to respond to Estee Lauder's application.

Since Estee Lauder filed the application, Truaxe has taken to Instagram to post a handful of missives, including copies of Estee Lauder's application, emails to and from Gelowitz, copies of text message conversations about his access to Deciem's social media accounts and rants about alcohol service at an Amsterdam hotel he purports to be staying at.

"Truaxe has exhibited extremely erratic, disturbing and offensive behaviour in his role as president and chief executive officer over the course of this year," Estee Lauder's court filing said. "Unfortunately, Truaxe's conduct has continued to become more erratic and concerning."

In its legal filing, Estee Lauder said Truaxe's decision to shut down the company, which attracted celebrity fans including Kim Kardashian West with its inexpensive "The Ordinary" line, happened without consulting Deciem's board or Estee Lauder.

The company alleged Truaxe also sent a mass email "purporting to terminate for cause various employees and members of Deciem's executive team, including (his) co-chief executive officer and the chief financial officer."

Estee Lauder alleged Truaxe threatened that anyone who did not follow his directions "will be terminated."

In court Friday, Nicola Kilner was appointed to replace Truaxe at Deciem's helm. Lawyers for Estee Lauder, Deciem and Cusano said they had spoken to Kilner who is willing to take the reins of the company and hopes to get the brand operating again on Saturday. Kilner did not respond to requests for comment.

Kilner served as Deciem's CEO until February, when Truaxe had her removed from the company. By July, he was celebrating her return to the brand on Instagram.

Estee Lauder's court filing said Truaxe's choices around Kilner's employment were made "unilaterally" and without being run by the board of directors or Estee Lauder.

In an email to The Canadian Press following the court appearance, Estee Lauder said that is "strongly" supports Kilner, Deciem's leadership and employees as it continues to run its business.

"We are confident that Deciem will continue to provide its consumers with the incredible products that they know and love."