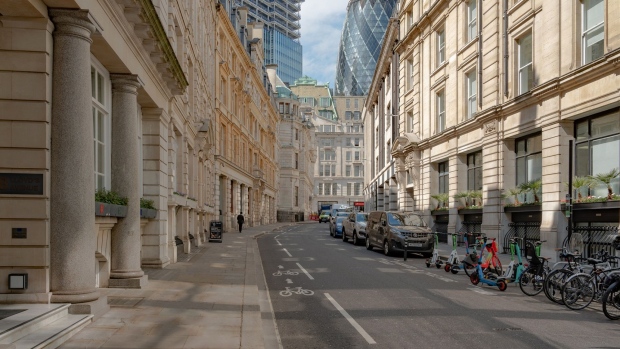 (Bloomberg) -- More than 85% of UK finance workers no longer view the office as their main place of work, highlighting the challenge the industry faces if it tries to persuade bankers to return to pre-pandemic norms.

The demand for a new paradigm is clear from a YouGov survey of more than five hundred finance executives from across the UK commissioned by Bloomberg News last month. Just 14% now consider the office their main workplace compared to 42% for the home and 44% for a hybrid arrangement.

The rise of remote work is a challenge all white-collar industries are wrestling with but poses a particular conundrum in finance given some critical roles — particularly trading — demand a fully-staffed office. It means plenty of firms, including Goldman Sachs Group Inc. and JPMorgan Chase & Co., have been pushing for staff to return as the pandemic eases.

“There’s a broad consensus to get people back three to four days a week,” said Lord Mayor of London Vincent Keaveny, who is the ambassador for the UK financial services industry. “There’s a lot of City roles where hybrid working doesn’t work.”

Bridging that disconnect between the corner office and rank-and-file workers will be vital for talent retention. Banks have already spent the past couple of years struggling to stem an exodus of workers leaving for tech firms, crypto or simply the beach.

Among those planning to exit the industry, most say they are leaving because of quality of life factors, the YouGov survey shows. Attempts to force a return could backfire spectacularly in today’s tight labor market.

So far, finance firms have reacted in different ways. Some have offered the familiar lure of cold, hard cash. Bonuses soared in 2021 and a slew of the big investment banks handed out across-the-board salary rises to junior staff in a bid to keep them on side.

Trading floors and office campuses have been refashioned in a bid to accommodate new working practices, with Citigroup Inc. planning to spend more than 100 million pounds ($124 million) to completely refurbish its 42-story office tower in London’s Canary Wharf district. Goldman Sachs — a bank whose hard-charging culture is part of Wall Street lore — has boosted the holiday allowance of junior staff and said partners and managing directors can take unlimited vacation.

And hybrid working — however reluctantly — is currently a fixture of finance. JPMorgan Chief Executive Officer Jamie Dimon may have been one of the most vocal cheerleaders for a return to the office, but he estimated in his annual letter to shareholders last month that about 40% of his 270,000-person workforce would work under a hybrid model.

Some smaller firms have gone even further, such as digital lender Atom Bank, which is switching to a four-day work week. For now, Atom is an outlier in that regard but few firms have been successful at instituting a five-day-a-week return to the physical office. Instead the prevailing approach — judging by foot traffic in the City —  is for workers to come in Tuesdays, Wednesdays and Thursdays.

It’s an uneasy truce in an evolving landscape. Lord Mayor Keaveny expects things to crystallize over the next two to three years as the thinking of both employers and employees continues to evolve.

What is clear is that, whether bosses like it, or not, hybrid working arrangements are here to stay.

“Everyone is going to have to engage with remote work to some degree,” said Claire Tunley, chief executive officer of the Financial Services Skills Commission, which is focused on building the sector’s skill and talent pipeline. “Working through the challenges of it is key.”