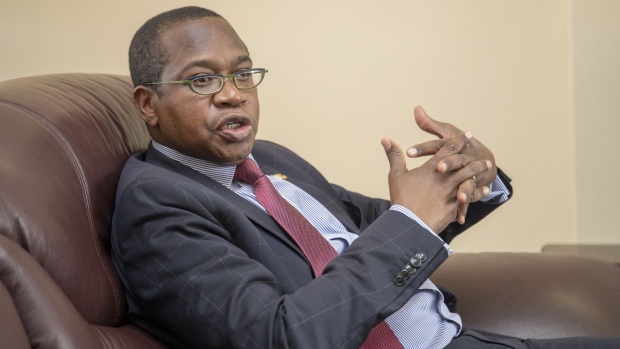 Mthuli Ncube, Zimbabwe's finance minister, speaks during an interview in Harare, Zimbabwe, on Thursday, Aug. 15, 2019. On the eve of major protests, which were called by the main opposition party over plunging living standards, Ncube said the country would establish a Monetary Policy Committee within a month that will cut interest rates, begin selling bonds with maturities of as long as 30 years, and proceed with a plan to privatize everything from state telecommunications companies to timber plantations. , Bloomberg

Zimbabwe will seek to raise $200 million in a debut domestic U.S. dollar bond sale on its stock exchange in Victoria Falls that trades exclusively in foreign currency, according to Finance Minister Mthuli Ncube.

“We may have it in small tranches, rather than a single big issuance,” Ncube said in an interview from New York, where he is on a roadshow to attract investment into the southern African nation. “We might put it in $30 million tranches of about six issuances.”

Zimbabwe is targeting a yield of 6% to 9% on the bonds, he said Wednesday on Bloomberg Television. Yield-hungry investors in frontier markets are interested in the offering, the minister said.

Earlier this month, Bloomberg reported that the bond sale would be for $100 million. In August, Ncube said a debt offering could help meet the cost of a $3.5 billion compensation bill the country is facing after it reached an agreement with White farmers evicted from their land two decades ago.

The so-called “Zimbabwe Global Investor Roadshow” has seen Ncube travel to South Africa and Dubai to court foreign investment. In New York, Ncube will also meet with officials from the International Monetary Fund and the World Bank, ahead of an IMF visit to Zimbabwe that’s expected next month.

The government has been building up a track record of repaying its foreign debt by making token payments to creditors including the Paris Club, Ncube said. The country defaulted on payments to the World Bank, the IMF and other multilateral lenders two decades ago.

The IMF is expected to make a decision on a new staff-monitored program for Zimbabwe later this year, according to Ncube. The IMF in February 2020 abruptly ended the program saying it had “gone off track.”

The Victoria Falls Stock Exchange also known as “VFEX” was launched a year ago and last week signed a pact with the United Arab Emirates to possibly establish a gold exchange. Ncube sees the exchange helping “deal with gold smuggling and arbitrage,” as well as advertising Zimbabwe’s mineral resources.

A cryptocurrency listing on the VFEX in future is also a possibility.

“We are trying to figure out how to invest in it as an asset class,” he said. The government has no plans to use crypto as a transaction currency, Ncube added.