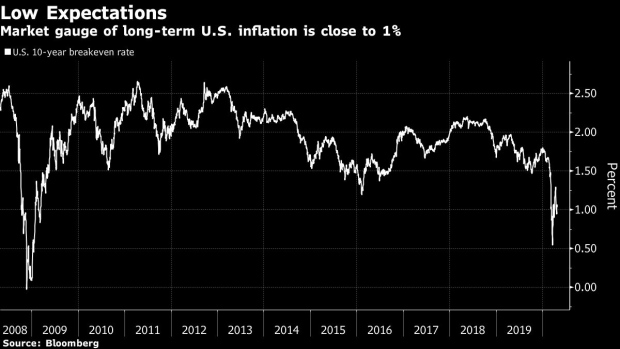 Bond investors are starting to debate whether the U.S. is heading into a deflationary spiral, even after trillions of dollars of stimulus to offset the pandemic-driven hit to growth.

This year’s collapse in oil prices and the drumbeat of staggeringly weak economic data are putting the question front and center as the Federal Reserve meets this week. The central bank is expected to sit tight for now and assess the programs it’s rolled out in the past month to calm markets, while reiterating a commitment to do more as needed.

But with market-based gauges showing investors see inflation stuck at best around half of the Fed’s target for the next decade, the risk of falling prices is creeping into money managers’ calculus. For Fred Marki at Western Asset Management Co., it comes down to the pace of economic recovery and the availability of testing and medical advances. Although the firm anticipates activity will start to revive, for now it favors areas it sees as having factored in the risk of falling prices and earnings, including investment-grade company debt.

“We think that there will be a sufficient relaxation of restrictions that will allow activity to pick up in the third quarter,” said Marki whose firm manages $460 billion in mostly fixed income. “We do not expect a multiyear deflationary era; rather, we expect deflation to be seen just over the course of the next year.”

Ten-year breakeven rates, a proxy for the market’s average inflation expectations into 2030, have stabilized after slumping in March to the lowest since early 2009, following a brief spell below zero. They’re now around 1.1%, up from as low as 0.47% last month.

The Fed targets 2% inflation and its favored gauge has missed the mark for much of the last eight years. Data this week are expected to show the measure slipped to 1.3% in March, the lowest since November.

The deflation debate is crucial for investors. The experience of Japan shows policy makers may struggle to reverse the phenomenon of dropping prices should it occur in the U.S. That dynamic could reignite the rush into Treasuries and drive yields below zero, said Ed Moya at Oanda Corp.

“Crippling demand is going to persist over the next year despite everything done to stabilize the economy,” said Moya, a senior market analyst.

When the Fed slashed rates to near zero at an emergency meeting March 15, policy makers pointed to below-target inflation and the need to lift prices as one reason for the move.

This month, Fed Vice Chairman Richard Clarida said policy makers “have the tools to keep the economy out of deflation.” Days later, St. Louis Fed President James Bullard said it’s hard to get a good read on inflation at the moment, but there’s some risk of deflation.

Craig Pernick, head of fixed income for Chevy Chase Trust, sees no way for consumer spending to rebound over the next one or two years, leaving him “solidly” in the deflationary camp for now. On the other hand, Bill Merz, whose team oversees $180 billion at U.S. Bank Wealth Management, expects negative inflation readings to be short-lived.